Earlier this year, Samsung launched its flagship tablet dubbed Galaxy Tab S6 in various regions. The tablet originally comes in two different variants – WiFi only and 4G+WiFi option. It seems like the company is now planning to introduce another variant of the tablet. We’re now looking at the Galaxy Tab S6 5G. Back in October, the 5G variant of the tablet first appeared online while receiving certifications from Bluetooth SIG and WiFi Alliance. 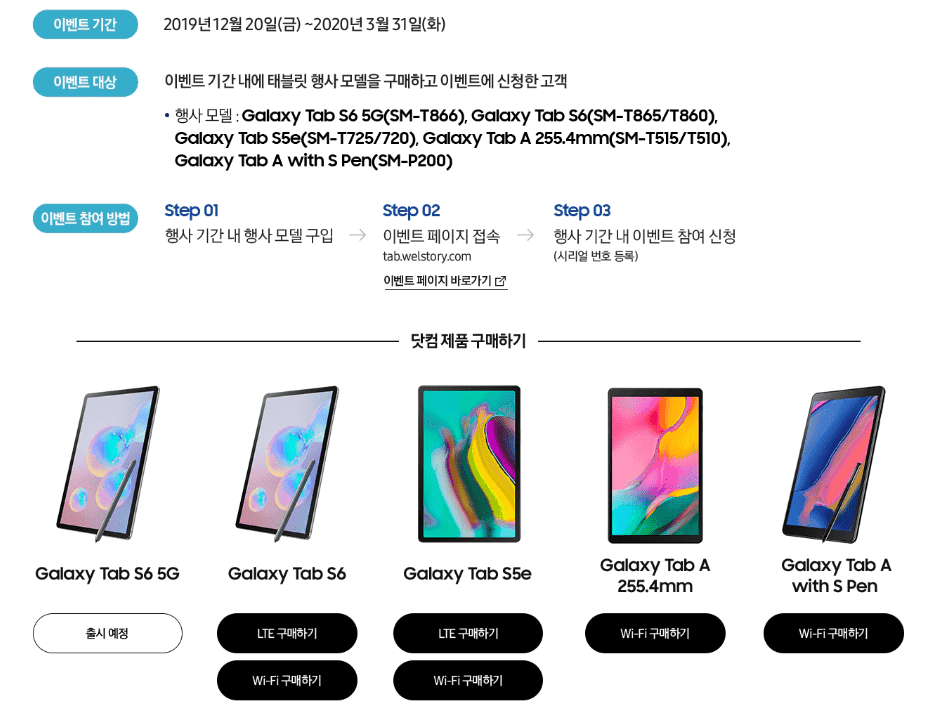 After the NRRA certification in South Korea, the tablet has now included in the promotional offers. For those who’re unaware, Samsung has announced some promotional deals in the country. For some reason, the unofficial Galaxy Tab S6 5G is also a part of the listing. Furthermore, the support page of the tablet is finally live on the official website. The support page reveals the SM-T866N as the model number of the tablet.

As you can see from the image, the upcoming 5G variant is a part of the listing which includes offerings such as regular Tab S6, Tab S5e, Tab A and Tab A with S-Pen. The promotional offer has already started and will end on March 31. We might see the tablet getting official within this promotional period. Furthermore, the live support page hints that the product might launch sooner than we currently expect.

The Tab S6 5G comes with the exact similar design and specifications as that of its other counterparts. The only difference is going to be the presence of 5G connectivity. Although there are certain reports claiming a 10.3-inch display on the tablet along with a larger 7,300mAh battery. It should be taken with a pinch of salt as of now. The product comes with a 10.5-inch Super AMOLED display which is HDR10+ compliant. It is also the first tablet to come with an in-display fingerprint sensor. Under the hood, the device runs on Snapdragon 855 chipset paired with up to 8GB RAM and up to 256GB onboard memory.

Previous Apple and Google Delist ToTok, Saying It Was Used to Monitor Activities

Next OnePlus Concept One Might Actually Be a Foldable Phone