Last month, Oppo officially announced that the company is working on its first smartwatch. The Chinese company’s VP Brian Shen has now started teasing the product on his official Weibo account. The teaser reveals the design of Oppo‘s upcoming smartwatch featuring a curved display panel. Furthermore, the wearable comes with square screen design making it heavily inspired by the Apple Watches. The watch in the teaser has a gold color casing around the display along with the gold color strap. 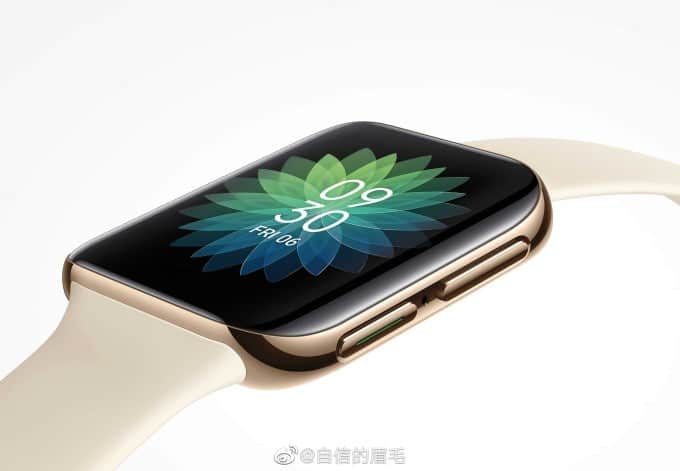 You can also see two buttons on the side that should be used for navigations such as the home button and the app screen. It is worth mentioning that even though the design is inspired by Apple, the company has not used the crown. If you look at the teaser image closely, you will notice an addition of holes between the two buttons. This should be the microphone meaning it will be possible to accept calls on the smartwatch. We still have to see whether the wearable will support e-sim to make calls even when the watch is not connected with the phone.

At the time of writing this, we don’t have much information on the internal hardware of the wearable. Coming to the launch timeline, the Oppo smartwatch should see its official unveiling somewhere around in Q1 2020. The Chinese smartphone maker will soon unveil its flagship Find X2 smartphone. We might see the company launching its smartwatch alongside with it. On the other hand, the brand might take the opportunity at MWC 20 to showcase the product. With that said, we’re still waiting for the official confirmation on the same. With the first teaser going live, we’re expecting more teasers to come forward in the coming days.

Read Also:  Oppo is preparing a Snapdragon 480 Plus smartphone with a FHD+ screen

Previous PS5: Announcement, pre-order details and other information may have been revealed