Today, Micron Technology announced that the world’s first low-power LPDDR5 memory chip has been mass-produced and will be used in the high-end smartphone market.

According to the official announcement, the Micron LPDDR5 uses leading packaging technology (a single die is 12GB). The transmission rate of low-power DDR5 is up to 6.4Gbps, which is nearly twice as fast as LPDDR4, more than 20% faster than LPDDR4x. And data access speed has increased by 50%. On the other hand, LPDDR5 has reduced power consumption by more than 20% compared to the previous generation. For the end-user, the most direct manifestation is battery life. According to Micron Technology, because LPDDR5 runs faster, the app processor and operation speed are faster. So terminals equipped with LPDDR5 will have a 5% -10% extension of the battery.

Also Read: LPDDR5 RAM Memories For Smartphones Are Official And Promise More Speed For Everyone

Micron’s current LPDDR5 memory capacities include 6GB, 8GB, and 12GB, with data transfer rates of 5.5Gbps and 6.4Gbps. This will effectively respond to various markets such as cars, client computers, and 5G and AI application-specific network systems for higher memory performance and lower power consumption demand. 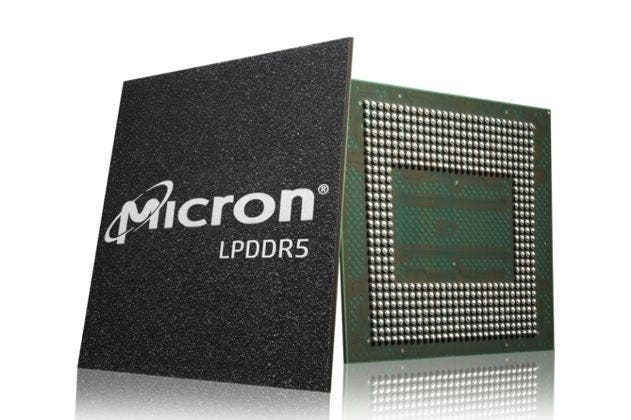 Micron will also apply LPDDR5 memory to mid- to high-end smartphones through UFS-based multi-chip packaging (uMCP5) in the first half of 2020. The multi-chip package LPDDR5 can extend battery life and provide higher bandwidth to support high-performance image processing functions previously only available on flagship models.

Micron believes that smartphones equipped with LPDDR5 in the first half of this year will focus on 8GB and 12GB of memory. But the flagship phone’s memory is expected to be increased to 16GB in the second half of the year.

Xiaomi’s annual flagship will hit the market soon. It’s considered to be the first smartphone with a Snapdragon 865 chip onboard. But apart from this, today, Micron Technology also announced the Mi 10 will debut with the LPDDR5 memory chip.

In this regard, Chang Cheng, vice president of Xiaomi Group, said, ‘We value Micron’s long-standing leadership and innovation capabilities in the memory field. Micron LPDDR5 DRAM memory has market-leading performance and brings lower power consumption to the Xiaomi Mi 10 smartphones, ensuring better performance and stability. We believe that LPDDR5 will be standard on flagship phones in 2020.’

Later, Xiaomi CEO Lei Jun updated the news that the Xiaomi Mi 10 uses LPDDR5. It will not only be equipped with Micron’s LPDDR5 memory but also Samsung’s LPDDR5 memory.

He said that LPDDR5 performance is very good, and he hopes that both suppliers will speed up production.

To showcase the advantages of the new-gen chip, Lei Jun the test results of LPDDR5 vs LPDDR4X. They have used the Xiaomi Mi 10 engineering machine. The results are as follows: 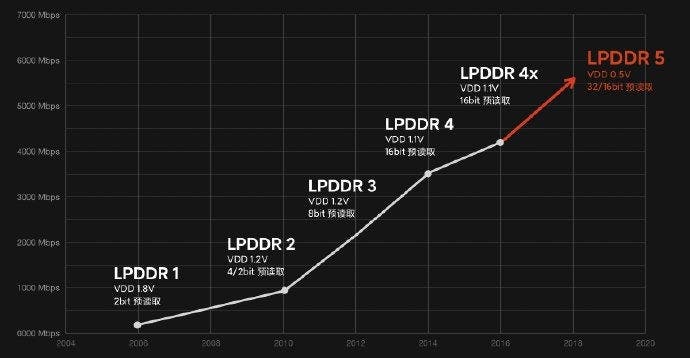 Lei Jun also said on Weibo that ‘LPDDR5, a leapfrog upgrade, has a huge impact on the improvement of smartphone performance. Last February, JEDEC released the LPDDR5 memory standard. The LPDDR4 standard has been upgraded from 3200Mbps to 5500Mbps and can transmit 44GB of data per second. LPDDR5 uses up to 16 Bank programmable and multi-clock architecture, and introduces Data-Copy and Write-X instructions to reduce power consumption, as well as links ECC error correction.’ 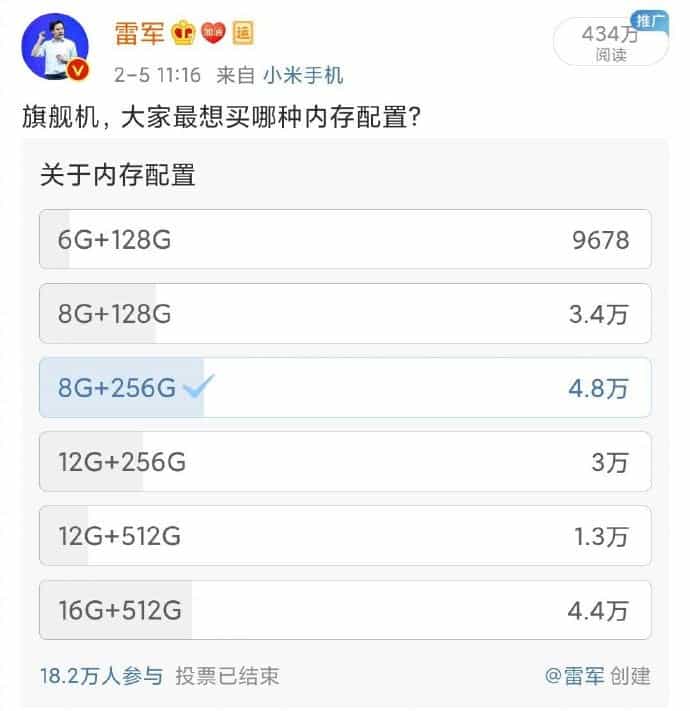 Of course, we understand that a new memory chip will cost more. But Lei Jun responded to some users, saying ‘we will bring LPDDR5 to all Xiaomi Mi 10 users, even if the cost is a lot more expensive.’ At last, it’s reported the Xiaomi Mi 10 will consider the 6GB + 128GB variant. But it seems there won’t be an 8GB + 64GB model.

Who Else Will Use LPDDR5 Memory?

Though Lei Jun didn’t talk about other Xiaomi smartphones that will use LPDDR5 memory, there are rumors the upcoming Redmi K30 Pro will be packed with it as well. However, this should be confirmed yet.

This afternoon, Xu Qi, vice president of Realme and global marketing president, revealed on Weibo that the Realme 5G flagship phone equipped with LPDDR5 is coming.

At the moment, however, it is unclear which manufacturer has supplied LPDDR5 memory to Realme. In this regard, in January, a Realme smartphone codenamed RMX2025 was certified by the Ministry of Industry and Information Technology. The TENAA documents showed it supports 5G networks in independent (SA) and non-standalone (NSA) modes. Some sources pointed out that this device is the Realme X50 Pro 5G. So there is every reason the first Realme handset with LPDDR5 memory will be this model.

Today, an unreleased smartphone with a Snapdragon 865 5G + LPDDR5 + UFS 3.1 combination was leaked. As you guess, it’s a standard flagship mobile phone. Interestingly, a VIVO executive ‘like’ the statement, which caused a huge stir. Many users think that this is going to be the next flagship of VIVO. Maybe it will come our way from the iQOO brand.

Needless to say that the Snapdragon 865 SoC is the latest flagship mobile platform released by Qualcomm. It is expected that most of the flagship smartphones in 2020 will choose this chip. It will integrate the Snapdragon X55 modem to support 5G networks.

Apart from this SoC and LPDDR5 memory announced today, the new VIVO phone will feature the UFS 3.1 flash memory, which is the fastest mobile flash memory at present.

A new and unreleased UFS 3.1 machine that was tested in AndroBench showed a reading speed of 1800± MB/s and a sequential writing image below shows that the maximum sequential write speed in the current UFS 3.0 standard test is 500± MB/s. 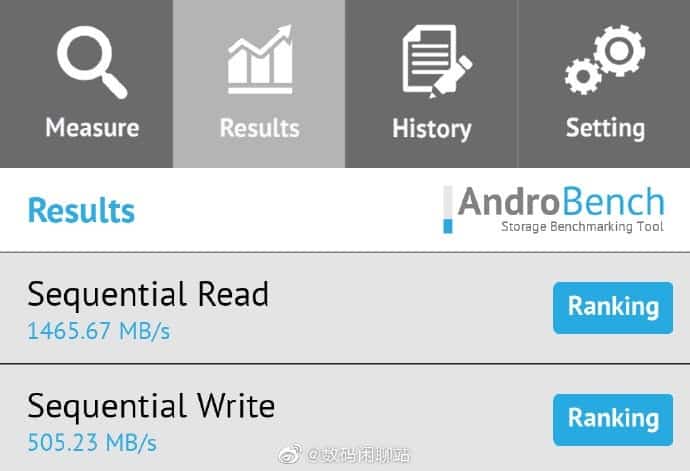 Much earlier, we have heard UFS 3.1 continues to support the HS-G4 specification, with a single channel bandwidth of 11.6Gbps. It is twice the performance of HS-G3 (UFS 2.1). UFS 3.1-compliant storage devices will continue to provide theoretical maximum bandwidths of up to 23.2Gbps (2.9GB/s). Plus, with the addition of write enhancer and HPB technology, the actual performance of the upcoming UFS products will become higher. At the same time, deep sleep helps extend the battery life of the device.

Next Google to present "something exciting" at Galaxy Unpacked event