Oppo is hosting an event on March 2 in India, where it is likely to unveil the Oppo Reno 3 Pro smartphone. Ahead of the launch, the handset has been frequenting the rumor mill for quite some time. Now, a new set of live images has surfaced online, showcasing its full design.

The images leaked by 91mobiles showcases three alleged real-world pictures of the upcoming Oppo Reno 3 Pro smartphone at a retail store in India. It shows the front of the device confirming some specifications and the rear panel design. Inspecting the image, we get to see the smartphone’s dual punch-hole front-camera setup and a thin chin at the bottom. 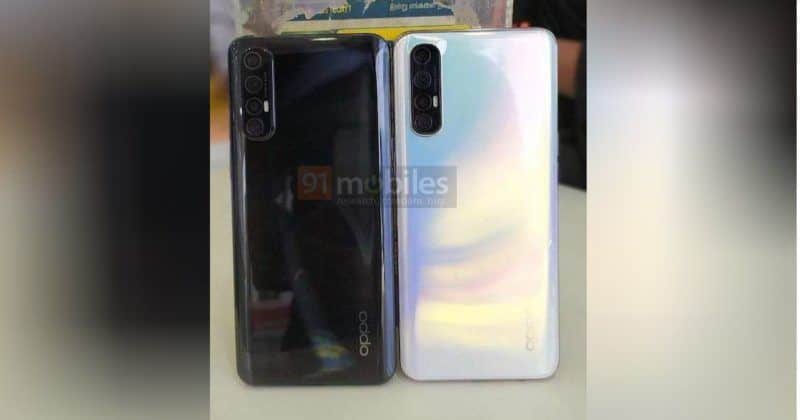 In addition to that, the back of Oppo Reno 3 Pro smartphone features a quad-camera setup with a dual-tone LED-flash. It comes in two different color options including Black and White, which seems to sport a gradient color finish. Since the fingerprint reader is nowhere to be seen, it may likely have an in-display fingerprint scanner. 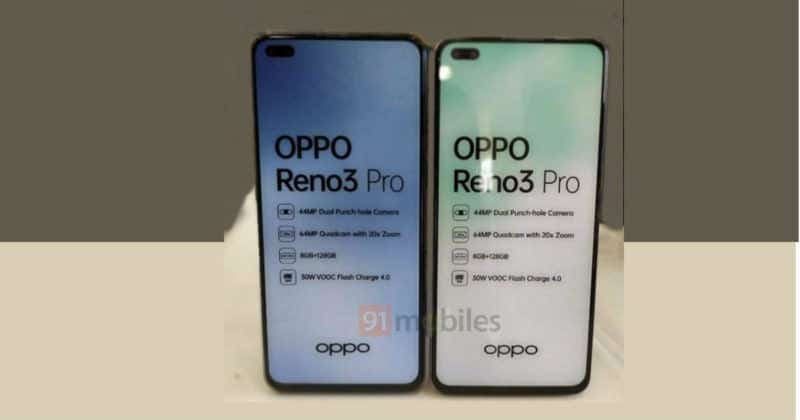 The Oppo Reno 3 Pro smartphone in the live images also has the marketing sticker attached to it, which shows some device specifications. Based on the image, the smartphone features an 8GB of RAM and 256GB internal storage. It also comes with the support for 30W VOOC 4.0 fast-charging. The new Oppo smartphone will also sport a 64-megapixel quad-camera setup with the 20X optical zoom capability. On the front, the device will feature a 44-megapixel dual punch-hole camera.

The report also revealed some previously leaked specifications of the device. The Reno 3 Pro smartphone could feature a 6.5-inch Full HD+ OLED display with a 90Hz screen refresh rate panel. It is likely to ship with the MediaTek Helio P95 SoC instead of the Qualcomm Snapdragon 765G chipset available in China.

The smartphone will pack a 4,025mAh battery and run on the latest Android 10-based Color OS 7 out of the box. For photography, the setup will likely use the Samsung 64MP GW1 primary sensor. Paired with a 13-megapixel telephoto camera, an 8-megapixel ultra-wide lens, and a 2-megapixel depth sensor.