Today, the Xiaomi community released the update description of the MIUI 20.2.17 internal beta development version. According to the announcement, due to the epidemic situation in China, only some models will continue testing this week. This MIUI 11 update is already available for Xiaomi CC9 Pro, Xiaomi Mi 9, Xiaomi Mi 8, Redmi K20 Pro, Xiaomi Mi 9SE, Xiaomi Mi 8SE, Xiaomi Mi 6 and a few others. However, the Xiaomi community also says that as Redmi K30, Redmi K30 Pro, and Xiaomi Mi 10 are currently testing this update. The Redmi K30 Pro is not even official yet but Xiaomi is already preparing its latest system update for it. 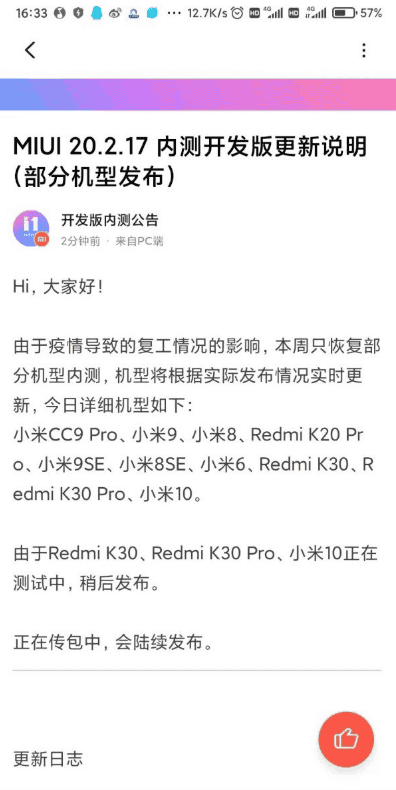 According to Zhang Guoquan, director of the Xiaomi Mobile Phone System Software Department, the software development plans for the Xiaomi Mi 10 series will begin beta testing on February 17. While Xiaomi Mi 10 will commence on February 17th, the Pro model will start on February 24th. However, the company also states that it will inform users if the epidemic situation affects the MIUI team.

The Xiaomi Mi 10 uses a 6.67″AMOLED punch-hole curved display that supports a 90Hz refresh rate and a touch sampling rate of 180Hz. The chin is quite thin (3.32 mm) and this display supports sunny screen 3.0, 1120nit brightness, 5000000: 1 contrast ratio, and a flexible screen COP process. It comes with dual front and rear light sensors which makes the automatic brightness more accurate. This smartphone uses a symmetrical stereo with dual linear speakers equivalent to 1.0cc shock sound.

This phone comes with the Qualcomm Snapdragon 865 SoC which supports SA / NSA dual-mode. It uses a new generation LPDDR 5 memory and a faster UFS3.0 which delivers write speed up to 730MB / s. It also support Wi-Fi 6 which comes with a throughput rate of 9.6Gbps. Thanks to its specs, the Mi 10 is able to score more than 585,000 points on the AnTuTu benchmark.