Earlier this month, Motorola announced its budget smartphone namely Moto G8 Power under its G lineup. As the name suggests, the device comes with a massive 5,000mAh battery packed inside. It seems like the company is now working on its toned-down variant. A new smartphone has just appeared on the Thailand NBTC certification with the moniker Moto G8 Power Lite. 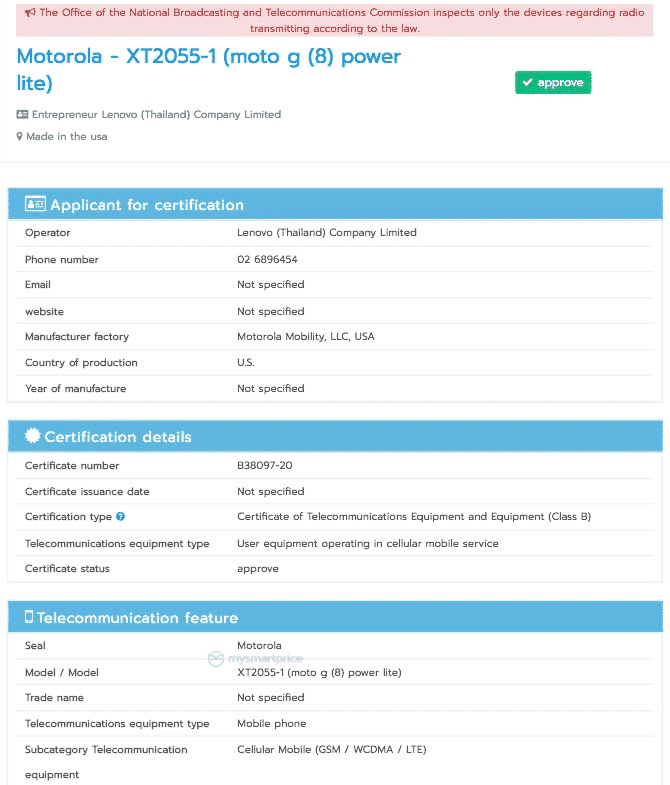 This report comes courtesy of MySmartPrice. As per the new certification, the smartphone appears with the model number XT2055-1. Furthermore, this is the first time we’re looking at the Moto G8 Power Lite moniker. Although a device with the same model number has previously appeared on FCC listing, unfortunately, the moniker was not confirmed. It seems like the company is indeed working on the Lite variant of its newly launched device.

Sadly, the listing hasn’t revealed any key information of the device except that it will support 4G LTE connectivity. Considering the previous FCC certification, the device will feature a massive 5,000mAh battery just like its older and powerful brother. This means that the company might cut down the cost by going with the cheaper chipset. With that said, we’re speculating to receive more information on this device in the coming months.

According to the report, the launch of the Lite variant might happen somewhere in the month of March this year. It is worth mentioning that the timeline can move forward considering that the MWC 20 has been called off.

Next MIUI 11 development version in testing for some Xiaomi devices