Last November, the Chinese company Oppo has introduced its new ColorOS 7, the latest version of the proprietary interface based on Android10. After the announcement, the company published the official roadmap and the update appeared on board the first models starting from January. Then the setback and the cause is highly understandable: the Coronavirus epidemic that has affected China. Through a press release on Weibo, Oppo confirmed the new update roadmap, with all the details.

Oppo ColorOS 7: here are the models that will receive the ColorOS 7 and when

Back in November, Oppo revealed the latest version of its Android Skin – ColorOS 7 – based on Android 10 in China. Soon after, the company revealed ColorOS 7 for global markets in a special event held in New Delhi, India. The companies even started to test the software with a select group of users and calling beta testers for COS7 update for several models of the brand.

Obviously, the initial plans concerning the first quarter of 2020 have gone because of the Coronavirus, which has slowed many activities. However, Oppo has released new details on the release of ColorOS 7 in China, with the list of supported devices and the related roll-out date. 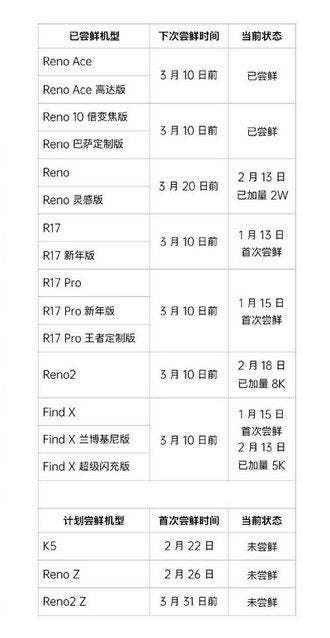 Obviously, we specify once again that the table refers to COS7 in China and that for the Global models it will be necessary to wait for more details from the brand.

With the arrival of ColorOS 7, Oppo seemed to change things a lot in the software thanks to the similarity to Android stock. So a lot of smartphone users of the brand await this update.

Next iPhone 9: official presentation on March 31 despite coronavirus