Samsung has recently confirmed that it will be holding a launch event on February 25. The company may likely announce the Galaxy M31 handset on the said date in India. Now ahead of its unveiling event, Ishan Agarwal, who is a known twitter leakster, has shared some fresh renders of the upcoming Samsung Galaxy M31 Design to reveal it from all angles.

As the name suggests, the upcoming Galaxy M31 will be positioned between the recently unveiled Galaxy M30s and M40 devices. The leaked renders of the smartphone, reveal that it will be coming in three color options including, Red, Blue, and Black. 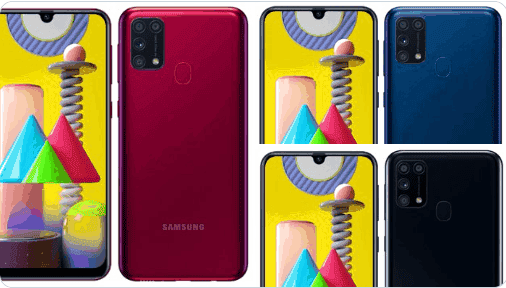 The front side of the smartphone features an Infinity-U AMOLED display with a slight bezel at the bottom. The back panel of the Galaxy M31 comes equipped with a vertical quad-camera setup. It also has an oblong-shaped fingerprint scanner. The small notch on the front houses the selfie camera.

Additionally, the back panel of the Galaxy M31 appears to have a curved left and right sides. Like the Galaxy M30s, the M31 seems to be equipped with a polycarbonate rear build with a glossy finish. The bottom edge of the phone also features a 3.5mm audio jack, an external speaker, and a USB Type-C port.

As expected, Samsung did not have innovation in its design as one of its objectives, which makes the device look similar in design with its predecessor. The Galaxy M31 is also likely to share some same specifications of the Galaxy M30s smartphone. The only notable difference in the leaked renders is the addition of the fourth rear camera sensor.

Since its launch, the Galaxy M-series smartphone lineup has become very popular, thanks to its excellent price/quality ratio. Samsung has also managed to keep the price of these devices affordable by keeping its standard design, which makes it look similar amongst other smartphones in the series.

Next Oppo is developing to make its Own Chipset, Trademark Filing Reveals