Xiaomi is struggling to ensure that all its Android One devices receive the latest Android 10 update. Early this month, the company rolled out the said update for the Mi A2 Lite, however, the rollout wasn’t succesful as expected. Rather than just minor bugs, the update for the A2 Lite came with serious issues that forced the company to push back the update. According to some users, the update damaged the phone’s LCD, while others state that the battery won’t charge fully anymore. In some extreme cases, the phones got bricked.

The Chinese giant is working hard to fix the issues caused by this flopped Android 10 update. The company’s software team states that it working towards rolling out a new OTA update. The update will reach customers until the end of this month. In essence, owners of the Mi A2 Lite will start receiving the revised update in batches before April. However, no specific date was stated for the rollout. 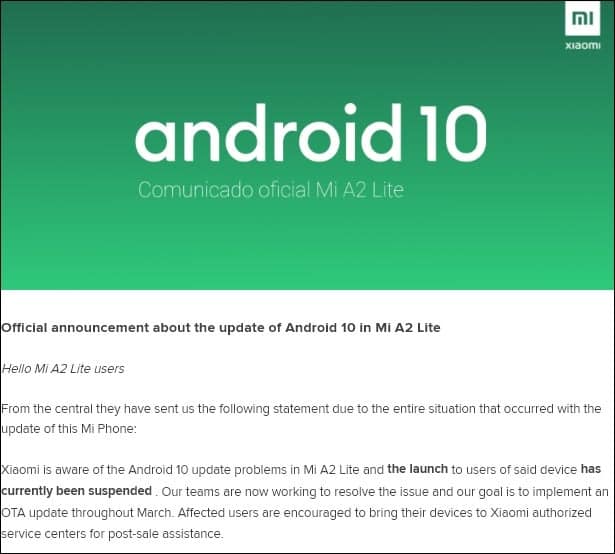 Moreover, Xiaomi is encouraging A2 Lite owners whose models were bricked by the buggy update to take the units to authorized Mi service centers. The second alternative is to return them to retailers for post-sales assistance (RMA). We know that some of these customers will hardly have any success with a warranty. After all, the smartphone came along with vanilla Mi A2 back in 2018.

Hopefully, the new update won’t be problematic as the first one. We also hope that Xiaomi provides a decent solution for users who had their phones truly damaged by this software.

Next DxOMark reviews will be delayed due to COVID-19 lockdown