Huawei will be announcing the P40 series, the company’s flagship smartphones for 2020 on March 26. And as usual, we’ve been subjected to tons of leaks revealing a lot of stuff including the Huawei P40 series design multiple times. But It’s not over yet. More specifications ( Huawei P40, Huawei P40 Pro) have leaked now days ahead of launch, via a leak by 91mobiles.  This comes after an alleged Geekbench listing of P40 Pro 5G has surfaced, one of the models in the series, exposing some key components of the handset. We’ve also seen our fair share of HD renders.

Starting with the Huawei P40 Pro 5G, it looks likely to boast a beastly quad-camera setup with a 50MP primary sensor, a 40MP secondary sensor, a 12MP camera, and a 3D ToF sensor. This will be a Leica Ultra Vision branded setup as usual and there’s supposed to be 50X SuperSensing Zoom as well. The front will have a 32MP selfie shooter and a depth sensor. Other key components include a 6.5-inch curved display, a Kirin 990 5G SoC, a 4,200mAh battery, and 40W fast wired charging.

A Huawei P40 Pro 5G with model number ‘Huawei ELS-NX9’ was recently benchmarked on Geekbench platform. As per the result, the device will run Android 10 (EMUI 10) out of the box, which is obvious for a phone launching in 2020. 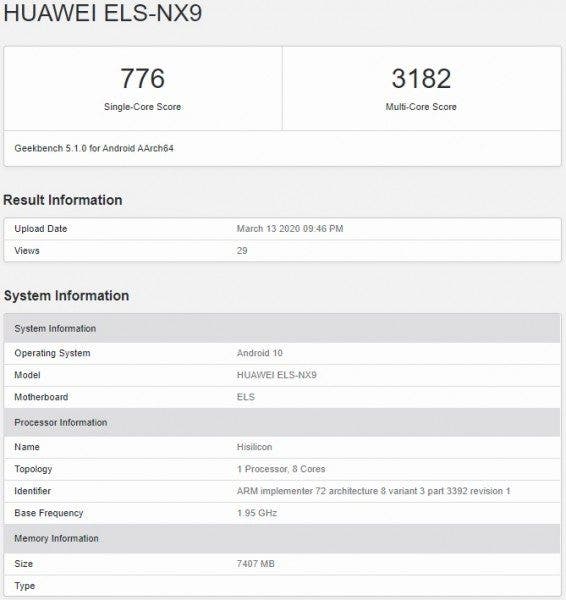 Coming to the Huawei P40, the rear camera of the phone would house 50MP + 16MP + 8MP Leica Ultra Vision sensors with up to 30X digital zoom and Huawei XD Fusion Engine for Pictures. The screen size and battery will also be smaller here coming in at 6.1-inches and 3,800mAh respectively.

That is all we know about the upcoming Huawei P40 Pro 5G. This device will be unveiled alongside a standard P40 and P40 Premium Edition on March 26. Further, these will be the first premium smartphones from the Chinese smartphone maker to come with HMS (Huawei Mobile Services) core out of the box.