Strategy Analytics today released new data for the tablet industry in 2019. The report pays special attention to the ‘global tablet PC application processor market’. Thus, the main emphasis is on the chip manufacturers such as Apple, MediaTek, Qualcomm, and Intel. It is worth noting that this report provides interesting data for the iPad because the processor of each Apple tablet is manufactured by Apple.

Over the years, Apple’s A-series processors have become very powerful. And this data underscores the importance of these processors for the iPad business. 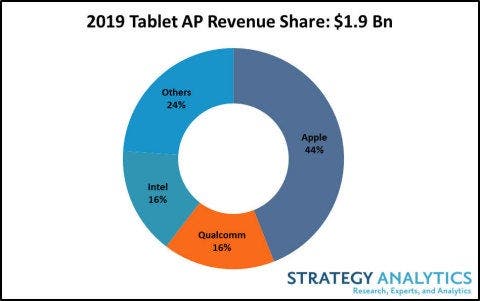 After Apple, the biggest players in this market are Qualcomm and Intel. These two account for 16% of revenue. The ‘other’ companies accounted for the remaining 24% of revenue. Among them, we can find Samsung and MediaTek.

We know that Apple does not announce the sales of any of its products. So it is impossible to know how many iPads it sold in 2019. Nonetheless, this data from Strategy Analytics gives people an interesting understanding of the popularity of Apple’s A-series processors. And of course, the continued growth of the iPad has a huge impact on this.