Counterpoint Research shared another of its reports, and the results aren’t surprising. China’s smartphone sales had its worst quarter in recent years, dropping by 22% compared to Q1 2019 values. The reason? COVID-19 pandemic ravaged China as well as several other countries in the globe. The market is being moved by a low demand along with the delay in supply chains. According to the report, shipments in February along declined by 35% Year-on-Year. At the same time, the share of online sales grew up to 50%, that’s 20% more than last year. 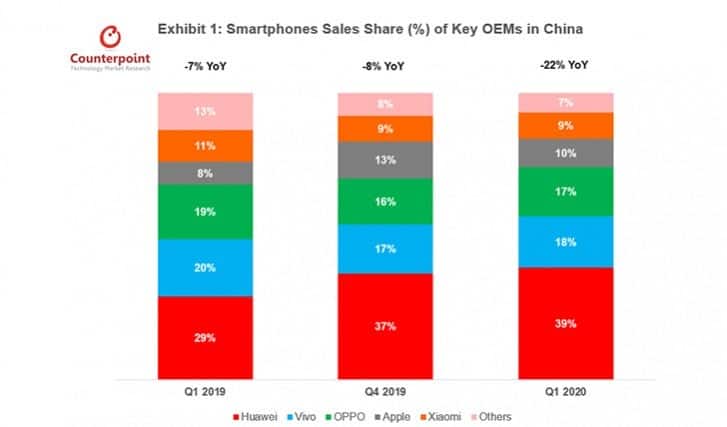 In counterpart to other OEMs, Huawei suffered minimum impact during Q1 2020. The company actually had a 6% increase in sales. Apple saw a 1% decline while Vivo dropped 27%, Oppo 30%, and Xiaomi 35%. In terms of market share, these companies accounted for 93% of total sales. However, Huawei alone had a nearly 40% share. The remaining 53% is split between the others. 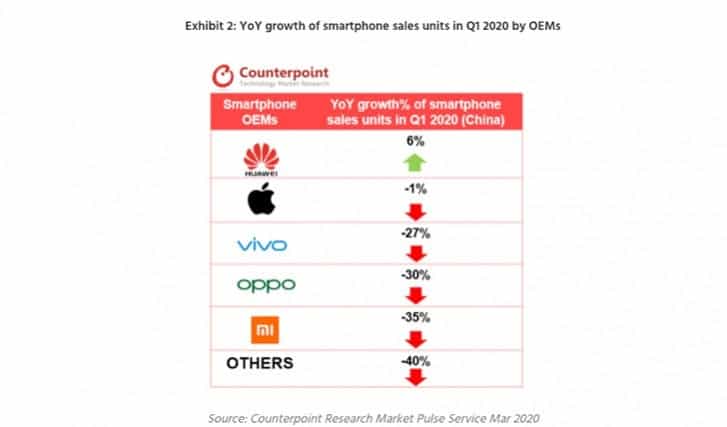 In January to February, the best-selling handset was the iPhone 11. However, the period also had other best-sellers like the Huawei Mate 30 5G, Nova 6 series, and Honor 9X. According to the report, 5G phones saw a huge increase of 120% compared to the last year. This is easy to understand, after all, more and more companies are shipping 5G smartphones with competitive prices. During Q1 2020 5G smartphones accounted for 15% of total shipments. However, Counterpoint states that until the end of Q4 2020, 5G smartphone will have at least 40% of the market.