The OnePlus 8 Pro has been in the news for various reasons since it launched a month back. Recently, a filter on OnePlus 8 Pro’s camera was reported to have a Photochrom feature that enabled it to see through plastics. Now, the company seems to have addressed this privacy issue, as it has said that it will be removing the filter option from the Phone’s camera soon.

According to OnePlus’ statement on Weibo, the company observed that the “Photochrom” filter option to be a privacy issue and also agreed with the feedback of various users in the community. The company iterated that the original purpose of the filter was to perceive the characteristics of infrared lights to give unique textures in the photos that were captured through it. 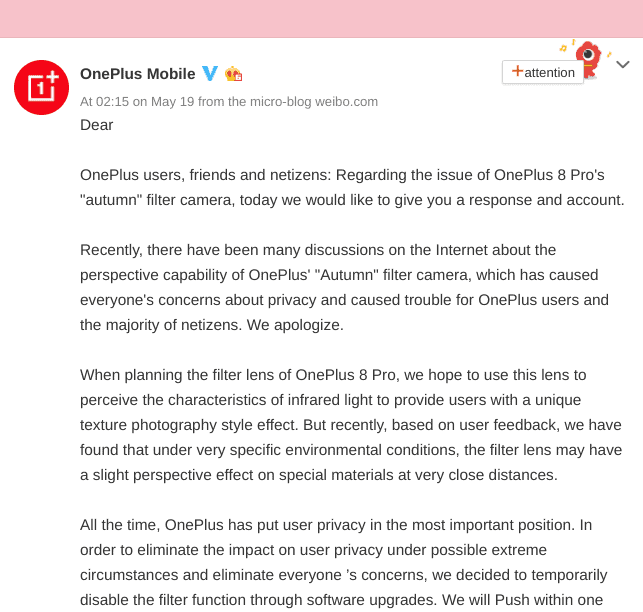 The issue gained recognition when under some environmental conditions, the filter on the OnePlus 8 Pro was able to see through special materials when at close proximity to the lens. OnePlus further added that the company always puts users’ privacy to be the utmost priority. Hence, to eliminate the concern of users, it has decided to temporarily disable the filter function via software update.

The company has mentioned that the update will be pushed within a week. The filter option in question is under the ‘Photochrom’ feature on Oxygen OS elsewhere and ‘Autumn’ feature on Hydrogen OS in China. Apart from this, Oneplus added that some users did like the feature due to its ability to take intriguing landscape shots and hence, has said that the company will adopt new solutions to make this filter work without any issue and relaunch it in the future.

If we recall, the device had a green tint on display within weeks of launch and OnePlus managed to fix most of the issue through a software update. However the recent statement is from Oneplus team in China and its international team is yet to respond on this.

Previous iOS 13.5 released: unlocking with a mask is more convenient