This morning, Meizu officially announced that the Meizu 17 / Pro series began to push Flyme’s new firmware updates. What’s interesting, this OTA update brings a 120Hz screen refresh rate early adopter mode, adds DC dimming, and supports HDR video playback. Meizu said it is being pushed one after another. If you haven’t received it yet, please be patient. 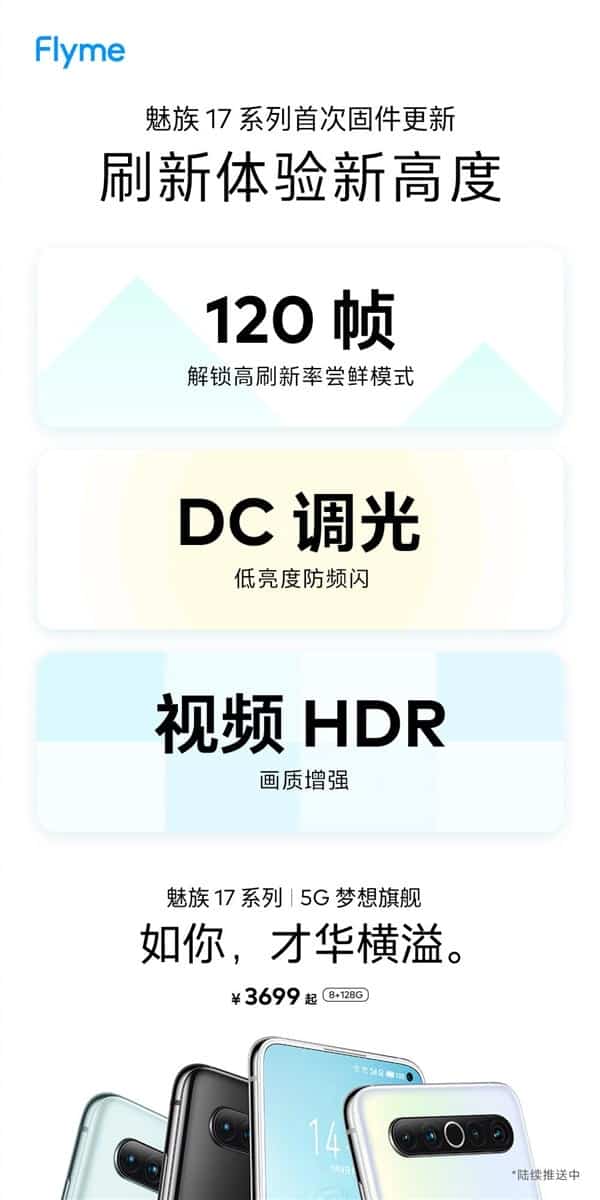 Compared with 90Hz, 120Hz can bring a smoother experience, more exquisite dynamic effects, and can perfectly show Flyme’s design advantages. A high refresh rate can also make the gaming experience more immersive. The Meizu 17 series has been adapted to Under One, “QQ Speed”, “Ace Warrior” and many other popular 90Hz games. It is reported that Meizu will also do more game adaptations for 120Hz.

The PWM dimming adjusts the brightness not by changing the power, but by turning the screen on and off alternately. The lower the speed of turning on and off, the greater the possibility of adversely affecting the human eye.

Because everyone has a different sensitivity to “flicker”, such as watching the same PWM screen, if someone feels fine, someone will feel tired. DC dimming can effectively solve this problem, and it is very friendly to people with very sensitive eyes.

However, there is a higher version of the Meizu 17 Pro, which comes standard with an LPDDR5 memory and supports 27W wireless overcharge and wireless reverse charge. The whole system adopts ceramic body design. The main camera has added a 64MP full-scene AR professional imaging system through the world’s first Samsung S5K33D deep sensor.