Honor is said to launch the new Play 4 series of smartphones next week. The device has been spotted in TENAA listing recently. Now, the official teasers shared by the company confirms that a Pro variant will tag along with the original Play 4 on June 3.

The official posters shared by the product manager of Play series on Weibo says that the next Play series will comprise of two smartphones: the Honor Play 4 and the Play 4 Pro. The launch is set to happen on June 3 at 15:00 China time. 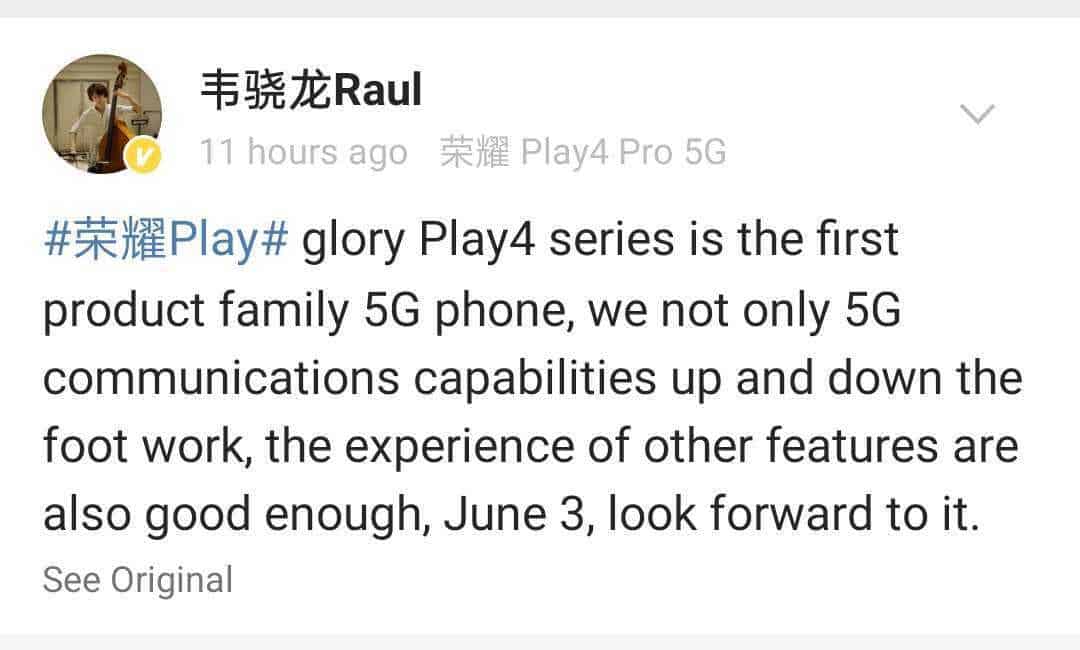 Further, reports from ITHome China say that the Pro variant could be powered by the flagship Kirin 990 SOC, along with an IR blaster. This will make the series a true successor of the Play series that launched in 2018. The original Honor Play rocked the Kirin 970 SoC which was a flagship SoC at the time.

The Honor Play 4 Pro will also have a 40MP Sony IMX 600Y sensor, according to previous leaks. This is one of the dual cameras that are present on its rear. On the front, the device will have a dual punch-hole screen.

However, the lower Honor Play 4 variant could come with a Dimensity 800 SoC on-board. Apart from this, the Play 4 Pro will also have 40W fast charging support.

Earlier, the device got listed on V-mall earlier and confirmed the leaked renders of the device. The handset has the unmistakable gaming design language on the back unlike the Honor Play. This means the device is apparently aimed at being a gaming smartphone. But the listing did not reveal any specifications.

We do not have any official pricing of the series but rumours suggest that the Pro variant could be priced at around $420. With only a few days remaining, we won’t have to wait that long to know the official pricing.

Previous Google to Host Android 11 Beta Launch Party on June 3: Here's What You Can Expect