Asus ROG Phone 3 has appeared in the Chinese TENAA certification database. It’s a smartphone for gamers that will offer really powerful specifications.

Asus has equipped ROG 3 with an overclocked Qualcomm Snapdragon 865 chip, whose processor works at a frequency of 3.09GHz. This will require adequate cooling. For now, the rumors point to liquid cooling and advanced fans. 16 GB of RAM will ensure high results in the benchmarks, and you’ll get 512 GB of built-in memory. So far, the smartphone has indeed achieved the best AnTuTu score of all time with 646 310 points. 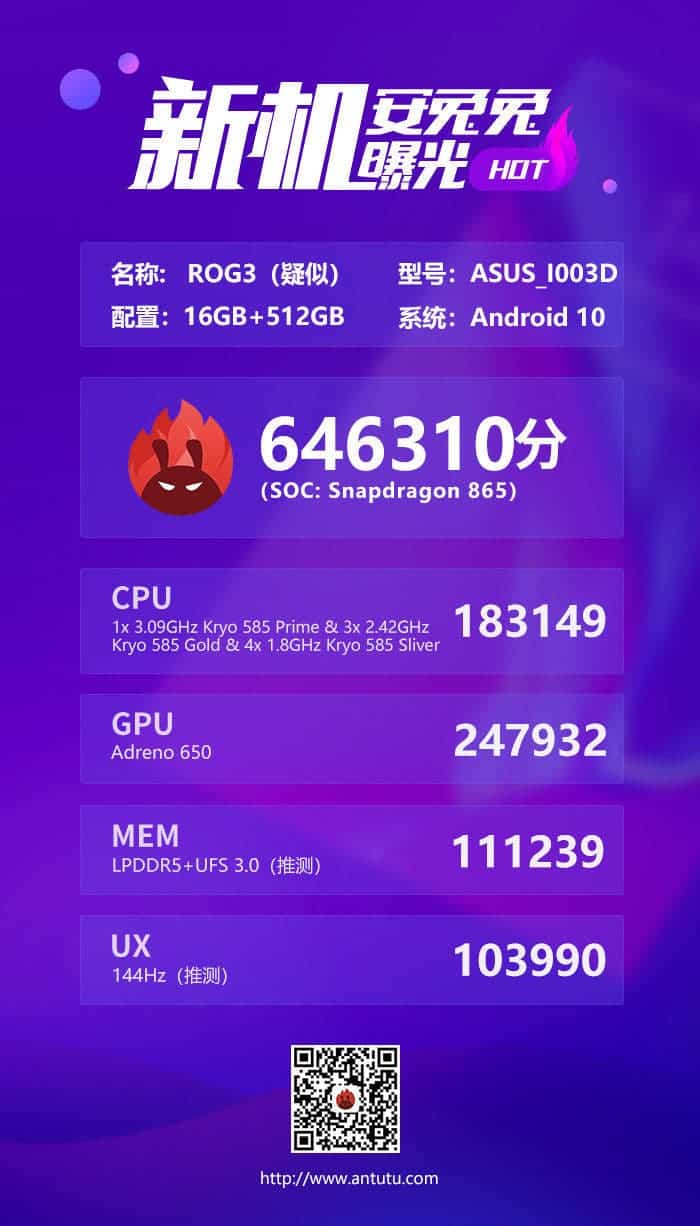 ROG 3 will also offer a 6.59-inch OLED screen with a 144 Hz refresh rate and FullHD + resolution. The whole will be powered by a powerful 5800 mAh battery.

The smartphone will not be stunning when it comes to cameras as usual in gaming smartphones. We will get a triple main camera with a resolution of 64 and 13 MP (we do not know the specifications of the third) while the selfie camera will have a resolution of 13 MP.

In 2019, Asus ROG Phone debuted in July, and appeared in the TENAA database in June. It is very likely that the same timeline will be kept this year.

More than the specification, I wonder what gaming add-ons ROG 3 will offer. I count on additional buttons to control games on the housing. Although probably similar to previous generations, an additional controller will be attached to the smartphone.

Among the smartphones that will be competitors to the Asus ROG Phone 3, we have Lenovo Legion gaming smartphone. Previous reports on the new Lenovo gaming smartphone say that it will contain a display with a refresh rate of 144 Hz (and a touch sampling rate of 270Hz), LPDDR5 operating memory, UFS 3.0 mass storage and a rear camera set consisting of a main sensor with a resolution of 64MP and ultra-wide-angle camera with 16MP resolution. The front camera is to have 20MP and will be sliding out from the inside of the housing (from one of the sides), thanks to which the display will have no indentations or cutouts.

As it is a gaming device, Lenovo Legion will have an efficient chipset, and excess heat from the components will be drained using an efficient cooling system. Also, the system interface will be non-standard, preferring the horizontal arrangement of the smartphone. The premiere of the smartphone was supposed to take place in April this year, but was postponed due to the current pandemic.

Previous Redmi 9A gets another certification - arriving soon