According to rumors, Asus is gearing up to launch a new gaming phone dubbed ROG Phone III in the next month. The new entry for the gaming series will come alongside the Asus ZenFone 7 series in July. So far, details around this smartphone have been scarce, but that is starting to change with the alleged launch date nearing the shores. Today, a couple of images and some key specs have been given by a reliable leakster.

The new bit states that Asus’ next flagship gaming smartphone will pack a 6.59-inch FHD+ OLED display with a 144hz refresh rate. Under the hood, the handset boasts the almighty Snapdragon 865 SoC paired with 16GB of RAM. That’s a really impressive amount of RAM and we expect no less than an LPDDR5X standard here. According to the leak, the handset also comes with a massive 6,000mAh battery with a 30W fast-charging standard.

Worth noting, that Asus will implement a binned Snapdragon 865 chipset with higher clocks than the standard. According to the report, it may use a Kyro 585 core clocked at 3.09GHz as opposed to the 2.84GHz clock on the vanilla version of the CPU. The Asus ROG Phone III may also include support for gaming accessories, with an additional USB-C port. 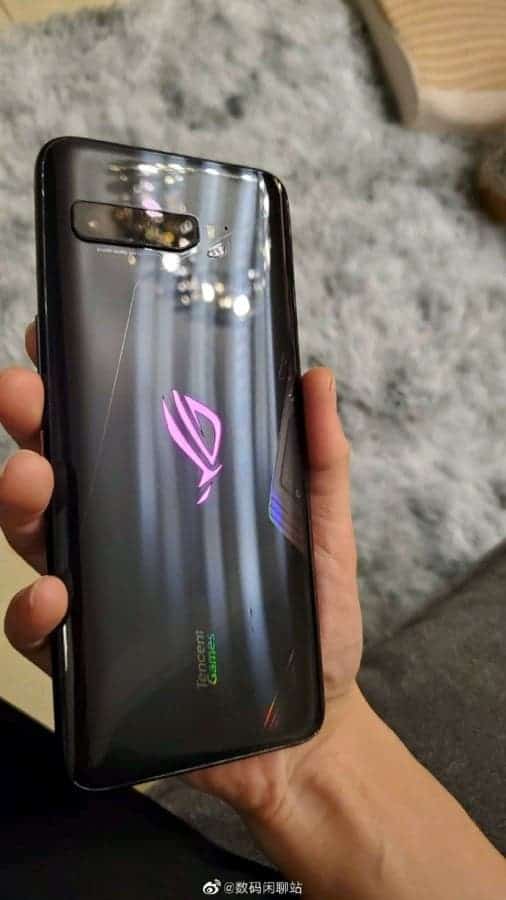 The images reveal an official render of the handset and a hands-on photo of the handset’s back. Asus will not make any drastic changes on the device’s front. Instead, it will stick with symmetrical bezels on the top and bottom. Interestingly, the back is fairly similar to the previous ROG Phone II. Of course, the traditional LED ROG logo will be present in the middle, and the device rocks a horizontal camera alignment. However, the camera module has a different shape this time, and apparently, it sticks out a bit more than in the ROG Phone II. The array is long enough to fit three cameras instead of two. The new handset will come with a telephoto camera in addition to the normal and ultrawide modules.

According to the leakster, it has a 9.85 mm thickness and 240g weight. However, that’s not too much if you consider the advanced cooling and huge battery fitted inside. Worth noting that this won’t be a smartphone for everyone and Asus is pretty aware of this fact. For traditional customers, the company will offer the Asus ZenFone 7, Asus 7, or whatever the company decides to call it. The ROG Phone III will keep the company’s tradition of a gaming-centric phone with advanced hardware and gaming-inspired look.