Huawei has recently confirmed that EMUI 11 will appear in the third quarter of this year. The new version of the user interface will be based on Android 11.

Thus, after this there is only one question, which devices will receive the update. Thanks to new information from insiders, we could easily give an answer to it. But, before we continue, it is worth noting that this data is not officially and not confirmed by Huawei.

Which Huawei and Honor smartphones will receive the EMUI 11 update?

So, on Weibo and the forum of the Chinese community of Huawei, a screenshot was published showing a list of devices supposed to receive EMUI 11. It is assumed that this list of devices supporting EMUI 11 includes models from the first batch of smartphones that will receive an update earlier than others. 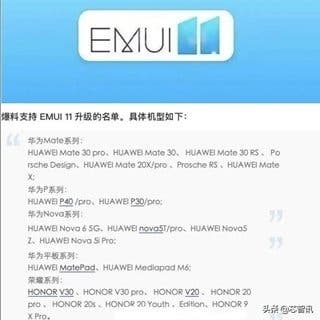 Note that Huawei releases at least two major Android updates for its smartphones. Since the devices on the list are launched with Android 9 Pie or newer, they should receive the EMUI 11 update based on Android 11.

We have some official information regarding the development of Huawei EMUI 11. According to Wang Chenglu, President of Huawei’s Consumer Business Software Department, the Huawei EMUI 11 will arrive in Q3 2020. This means that we are expecting this new system between July and September this year. Furthermore, he said that the EMUI 11 system will be an advancement of the EMUI 10. Of course, we do not expect the EMUI 11 to be on par with EMUI 10. It should be better and more seamless than its predecessor.