For many years, the main problem of Android devices has been the distribution of updates of new versions of the OS compared to iOS. The reason for this was the variety and the high cost of transferring new versions to old hardware due to an unsuccessful system architecture. With the release in 2017 of Project Treble for Android 8 and above, which separates low-level code from the operating system, it has become much easier to adapt new versions of Android with the devices.

Android 10 is the most quickly adopted update in Android history

Today, this approach has led to the fact that each new version of the green robot significantly exceeds the previous one in terms of speed of introduction to the market. So, for example, a fresh Google report says that about 100 million devices were running Android 10 after 5 months from launch. This is 28% faster than Android 9. In the future, Google promises a further improvement in deployment speed. And who knows, maybe one day we will see the performance of iOS-systems. 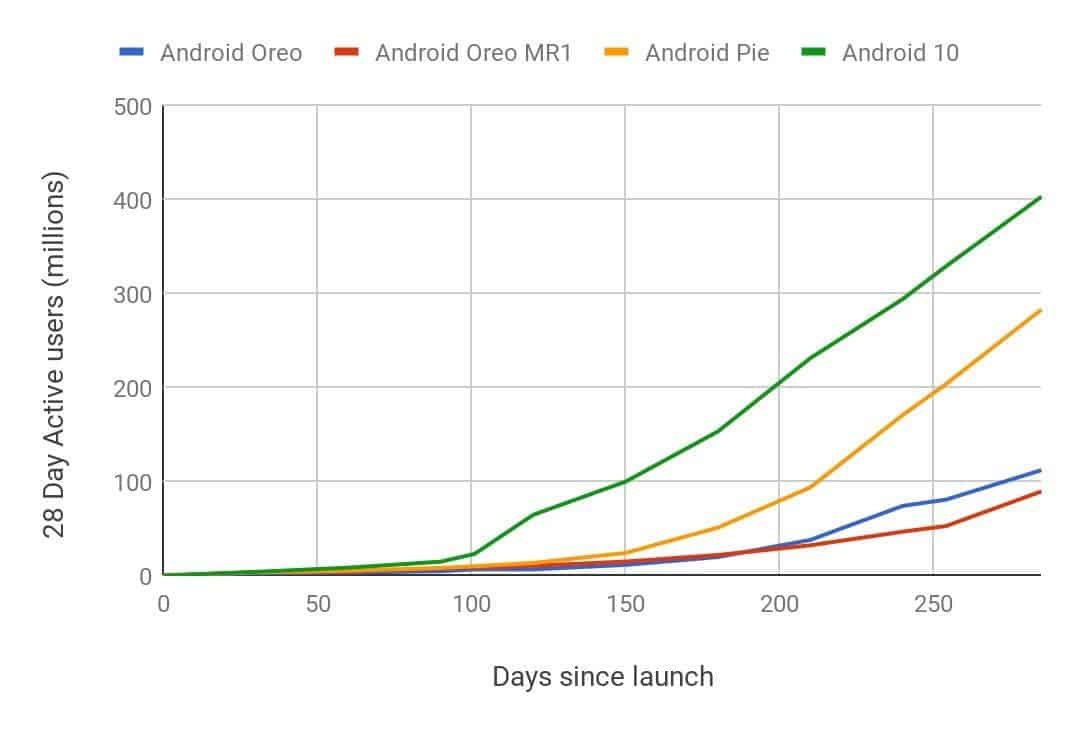 Note on the graph that Android 10 has passed the milestone of 400 million active users in 300 days. The total fleet of active Android devices exceeds 2.5 billion devices. In addition, Android 10 accounts for around 16% of the market. But still, the Google system is still far from its competitor’s statistics. The iOS 13 which is launched around the same time is installed on 81% of iPhones and 73% of iPads.

Android 11 stable version will probably be released on September 8

So far, Android 11 is available to users and developers only in beta status. But there is not much time left until the final version of this OS is released. Judging by the video posted on the YouTube channel for Google developers, the stable version of Android 11 will be released on September 8.

Last year, on the first Tuesday of September 2019, Android 10 was released. So Google does not change its tradition. It should be noted that the release of the final version of Android 11 in early September is not equivalent to its appearance on smartphones. Only Google Pixel will receive the OS on the same day. And other manufacturers will release the corresponding updates in a month or two. And that is not for all models.

Usually, Android smartphone manufacturers offer support of new operating system versions for two years. This usually include 2 major Android updates. But, it takes from 3 to 9 months to get the update after its official release by Google. The flagship smartphones are usually the first to receive it, while the mid-range and low-range devices wait longer.