Chinese companies are moving forward with the speed of light. Yesterday, we saw iQOO demonstrating its 120W fast charging. Whereas, Oppo says to launch their 125W Super Flash Charge technology on 15th July. And the sub-brand of Oppo, Realme also doesn’t get want to left behind. Realme announced on Weibo that they are also going to reveal their fast charging technology on July 16th. 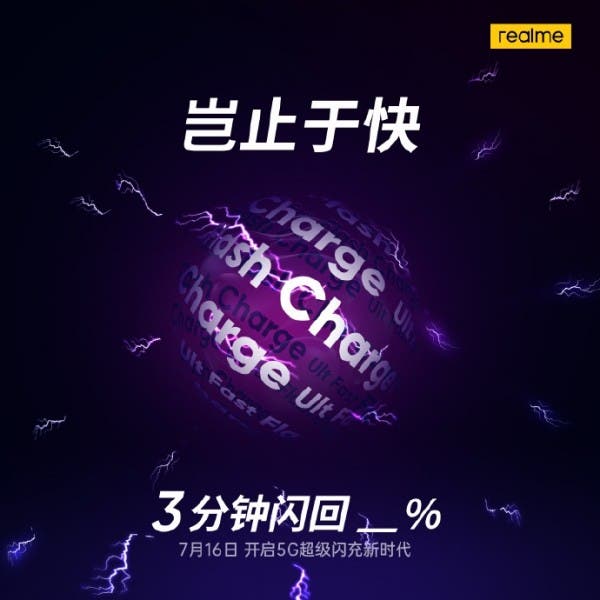 Today a poster has been posted on Weibo. The poster doesn’t mention the speed that will be introduced. However, previously, we got to know that Realme will be introducing its 100W+ Ultra Dart technology. The poster is in Chinese and according to the translated version, it says “Open A New Era Of 5G Super Flash Charging On July 16th.” Hence, it is confirmed that we’ll see Realme’s fast charging solution at the very next day to the Oppo.

The statement also mentions 5G, which we have seen to be the main goal of mobile phone manufacturer companies this year. Hence, 5G and Super Flash Charging are the two things that are being focused on by Realme. The question which arises is the charging speed that will be introduced. iQOO went with 120W, Oppo with 125W and now Realme?

Well, we have a strong hint. The Vice President of Realme China, Xu Qi also posted the poster on his Weibo account. His caption included a binary number, which we suppose gives us a hint at the charging speed. The binary number that was mentioned is ‘1111101′. If we translate this binary number to decimal, then the result is 125. This means that Realme will reveal the 125W fast charging technology on Thursday.

If you’re wondering how come all three brands are launching the fast tech simultaneously, then it is because they all come under one parent company BBK electronics. However, Xiaomi is also going to launch 100W fast charging soon. It is said that Xiaomi will launch a flagship smartphone with 100W fast charging. And rumors are that iQOO will also be launching flagship device 120W fast charging support in August. Hence, it is not long before the tech is available in the market.

Chinese companies have uplifted the smartphone game by the new technology. The reason being is a high competition between the manufacturers. Whereas, the irony is that some brands are planning to remove the charger in the box. Will you buy a smartphone with no charger or a phone with a rapid fast charger? Let me know your opinions below.