Slashleaks has posted a listing of some of the specs of the upcoming Huawei Mate 40 smartphone.

Some of Huawei Mate 40 specs

Also mentioned are a non-removable battery, a gravity sensor, a proximity sensor, a light sensor, an acceleration sensor, an electronic compass, fast charging support, a gyroscope and a fingerprint sensor that is located under the surface of the screen. 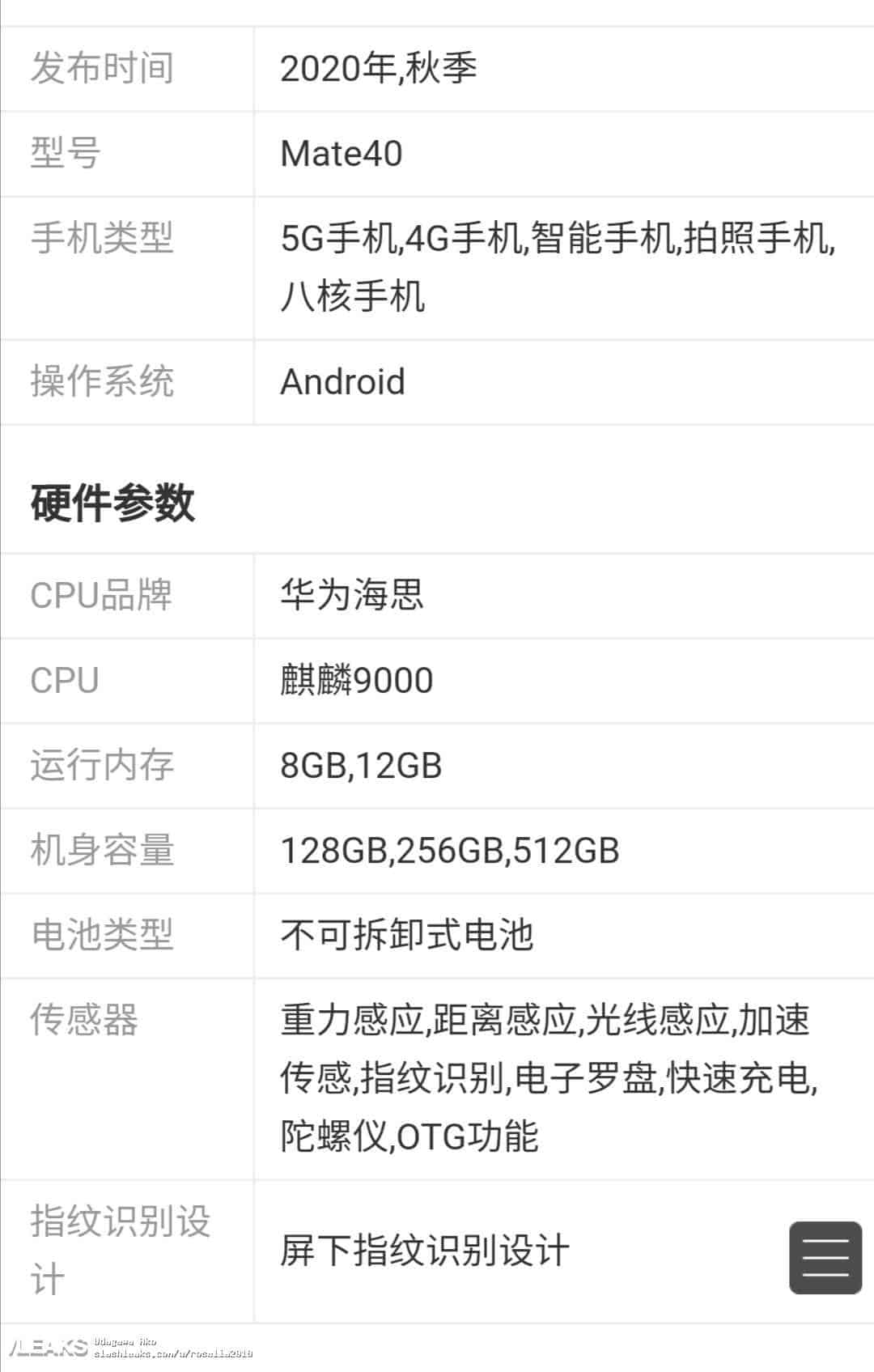 The smartphone should receive a flagship camera. It should at least not be inferior to the Huawei P40 camera, but its specifications have not yet been reported.

The presentation of Huawei Mate 40 will take place in September this year. The information was personally confirmed by the CEO of Huawei Consumer Business Group Yu Chengdong (Richard Yu).

Huawei Mate 40 will end the cycle of Kirin-powered flagships

Now that the second season of flagship smartphones has officially started with the arrival of Samsung’s Galaxy Note 20 family, Huawei is also gearing up to announce its H2 flagship in the form of Huawei Mate 40 series. The first leaks and reports about the upcoming flagship are already emerging. First of all, it will be another powerful camera powerhouse with the excellent performance of the latest Kirin chipset. Just recently, Richard Yu, President of the Huawei Consumer Business Group, revealed attendees that the Huawei Mate 40 will be packing a HiSilicon Kirin chipset. Also recently, we can pretty much assume that the Mate 40 with the Kirin 9000 will end the cycle of Kirin-powered flagships.

According to the executive, HiSilicon will no longer be able to fabricate Kirin chipsets after September 15, 2020.  Now the production is rushing to ensure the biggest possible amount of Kirin 9000 units before that dead end. The end of Kirin chipsets comes as a result of contract chipmakers are not capable of using US-developed technology to fabricate chips for Huawei. This includes TSMC which is behind the manufacture of HiSilicon’s chips. TSMC currently produces all of HiSilicon’s high-end chips for Huawei flagship devices. As well as their networking processors for the fifth-gen network support.

Huawei has been running to find a viable solution to replace TSMC. This pursuit resulted in a partnership with the Chinese SMIC which brought the HiSilicon’s Kirin 710A chip. Unfortunately, SMIC is far away from being capable of producing cutting edge 7nm or 5nm chips. Even modern mid-range phones are already sporting 12nm or even 7nm manufacturing processes. After September 15, Huawei will not have a viable in-house solution to compete in the smartphone market.

Next Samsung Surpasses Xiaomi and VIVO In India, If Taking Into Account The Feature Phone Market As Well