Back in the last month, Xiaomi’s Redmi finally introduced the highly-anticipated Redmi 9. The device was a nice surprise since it surpasses its predecessor in all aspects. In fact, the Redmi 8 was a little underwhelming with the very same chipset of its Redmi 8A sibling, the Snapdragon 439. This year, however, Redmi is addressing the low capabilities with a MediaTek Helio G80, a gaming chipset. It’s not as powerful as the Helio G90T found in the Redmi Note 8 Pro, but makes the Redmi 9 capable of running most games in Play Store without any hassle. The device is available in global markets but reached India as Redmi 9 Prime. Now, it seems that Xiaomi will unveil another variant of the smartphone in India.

The landing page contains a few clues as to what we can expect. Apparently, the Indian Redmi 9 will be, in fact, the Redmi 9C released one month ago along with the Redmi 9A. The Redmi 9C was a nice surprise brought by Xiaomi this year. Instead of announcing just a single low-budget phone the company announced the Redmi 9C as a smartphone that sits a little above the 9A, but below the Redmi 9. Interestingly enough, rumors have been suggesting the release of 9C in the country as a Poco C3 smartphone. 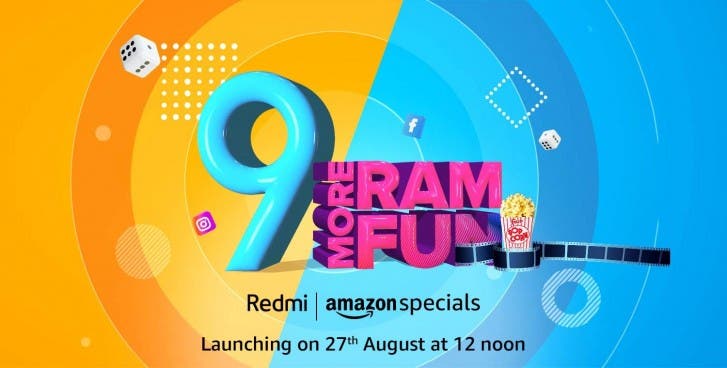 The Redmi 9C boasts a 6.53-inch LCD display with a waterdrop notch housing a 5MP selfie shooter. It’s a HD+ panel but at that price point, we can’t complain. One of the biggest highlights of this phone is its rear camera setup. The Redmi 9C brings a Triple-camera setup to a low-price level. The main camera is a 13MP unit that gets help from a 2MP unit for macro and another 2MP unit for depth data.

Under the hood, the Redmi 9C boasts the Helio G35 chipset. Interestingly enough, this chipset’s performance isn’t comparable to the likes of G70, G80, and G90. However, it’s much better than the last year’s Snapdragon 439 found in the biggest majority of Redmi low-end devices. The G35 is a Cortex-A53 Octa-Core with a moderate performance for most tasks. It can run some games in the lower and medium graphic modes. The handset is available in two flavors with 2GB of RAM and 32GB of storage and 3GB of RAM and 64GB of storage. It’s good to see that Xiaomi is dropping the 16GB storage option, offering 32GB instead.

Despite the clear indication of Redmi 9C arrival, we still need to wait for a confirmation. After all, we still have the “Poco C3” problem. We’ll find out the truth in seven days.

Previous Which color version of ELEPHONE U5 do you prefer ?