Since the beginning of 2020 we have been hearing news about Samsung’s plans of greatly expanding its foldable smartphone line. It started with the launch of Galaxy Z Flip in February. This month, the company unveiled the Galaxy Z Fold during the August 5’s Galaxy Unpacked event. The device was “revealed” but still needs a proper launch to reveal all its specific details and sale details. Meanwhile, reports state that the company is holding a more affordable variant dubbed Galaxy Z Fold Lite for a future release. 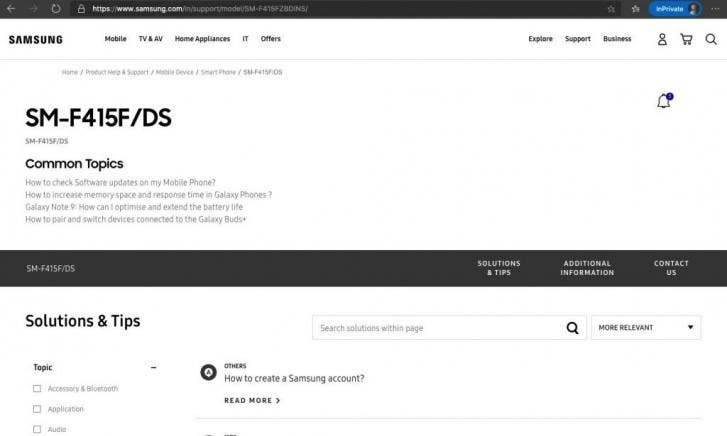 The model number has now been spotted among the support pages of Samsung’s official website for India. Of course, this does not give us any sort of details about the upcoming device. However, it practically confirms the arrival of such variant in the subcontinent. It makes perfect sense, after all, if Samsung wants to release a mid-range device, then, it should release it one of the world’s most competitive markets for smartphones.

According to previous rumors, the Galaxy Z Fold Lite will carry the Snapdragon 865 chipset which effectively makes it a flagship-level device. However, these rumors state that it would loss the 5G connectivity which is a bit odd. So far we’ve not seen any device with the Snapdraogn 865 lacking 5G connectivity. The device would also loss the Ultra Thin Glass layer. Of course, we may see other cuts to reach the rumored price of just $1,100. This is a lot less than either the original Fold, Fold 2 or even the Z Flip. The new phone may go official in the Mirror Black and Mirror Purple color options.

Of course, all these rumors should be digested with a pinch or two of salt. We’re yet to hear an official confirmation from Samsung regarding the Z Fold Lite. We just hope that all the cutted corners don’t affect the device’s quality. After all, the first Galaxy Fold iteration told us a story that is hard to ignore.