Tomorrow, on September 1, ZTE will launch the world’s first under-screen camera phone. The ZTE Axon 20 5G is also going to be the world’s first true full-screen smartphone with no additional structure. Today, the manufacturer released the latest promo poster. And in fact, what really do we know about this handset?

According to the latest countdown promo poster released by ZTE, in addition to the announcement that ‘the world’s first commercial under-screen camera phone is two days away from the release’, in the lower part of the poster, we can read: ‘I see further because I’m standing on the shoulders of giants.’ So what is it talking about? Will this machine support ultra-high zoom capability? 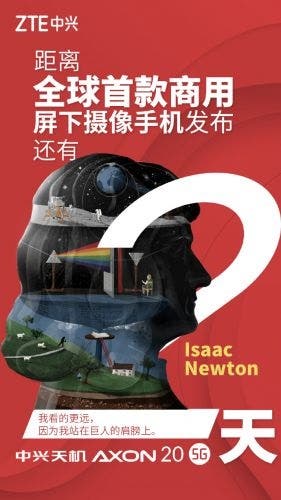 Currently, the Xiaomi Mi 10 Ultra has the highest 120x zoom capability. If the guess is true, then the zoom capability of the AXON A20 5G is expected to exceed 120 times.

In other aspects, according to previously exposed news, the new ZTE AXON A20 5G new machine uses a 6.92-inch OLED screen with a resolution of 2460×1080. And there are no openings on the front of the fuselage. Thus, as said, we are dealing with a true full-screen smartphone. The back is designed with 3D glass. It carries a rectangular vertically arranged quad-camera module. It is located in the upper left corner.

Under the hood, the phone will sport a Qualcomm Snapdragon 865 or Snapdragon 865+ mobile platform, with up to 12GB memory + 256GB storage. The front camera will have a 32MP resolution. The rear camera will be composed of a 64MP + 8MP + 2MP + 2MP sensors combination. The battery capacity is 4120mAh.

In addition, the machine has a body weight of 198g and a thickness of 7.9mm. It will provide four color combinations of black hole gravity, streamer sea salt, phantom orange wind, and purple moon. 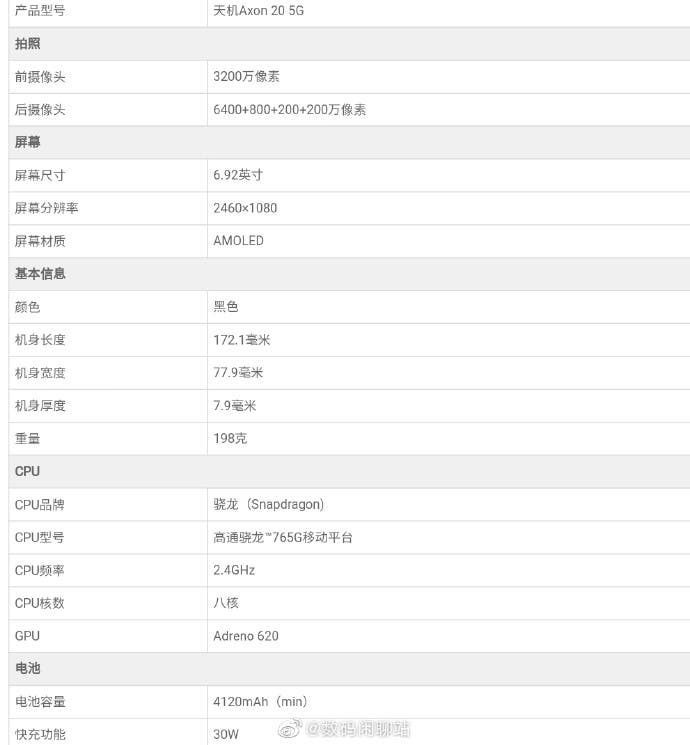 Well, we have known this until today. One of the most popular Weibo bloggers disclosed some key features of the phone. And though most of them match with what we told above, there are some eye-catching differences. Say, if the screen size, battery capacity, camera sensors, and many other features are identical, the processor is not what we have been waiting for. It turns out the ZTE Axon 20 5G will be powered by a Snapdragon 765G chip. However, we have talked about the advantages of this chip in an early article. So this is not the worst solution at the moment.