According to the latest statistics from Sensor Tower, TikTok’s August global revenue fell a lot from the previous month. According to the report, despite the fall, TikTok is still the world’s highest non-gaming app. The data shows that TikTok’s total revenue in the Apple Store and Google Store exceed $88.1 million in August. This is a 14% decrease from the previous month’s $102 million. The figures for the application from April to June this year are $78 million, $95.7 million, and $90.7 million respectively.

In addition, about 85% of TikTok’s August revenue came from China (TikTok), while revenue from the United States accounts for only 7.8% of the total. Furthermore, the Turkish market accounts for about 1.4%. 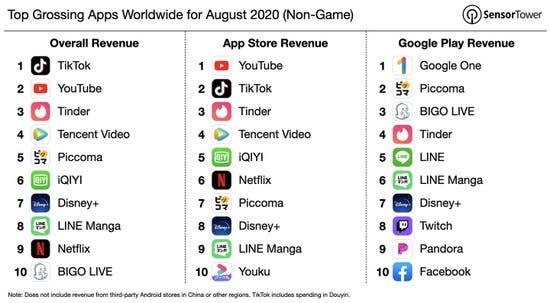 At present, TikTok’s main competing apps in the US market are Triller and Likee. The two apps have been ranked among the top apps in the US since January this year. Among them, Triller has won the presence of US President Trump.

CHINA MAY WANT TO BLOCK THE TIKTOK SALE

China is well aware of the September 15th dateline before it imposed its new restriction. Most likely, the Chinese government does not want the deal to pull through. he new restriction from China will further slow down the discussions for a potential deal. In fact, there are speculations that China may delay the transaction until after the U.S. presidential elections in November.

Some people believe that the United States may violate the constitution with the TikTok deal. There are also reports that the stands of the U.S. feel more like extortion. Firstly, it is strongarming a private business to sell to an American company. In addition, it is also strongarming the American company to pay a huge royalty to the government after the deal. Regarding this deal, there are a couple of pending lawsuits. We will see how all these play out in the coming weeks.