Apple and Epic have been in a war of words since Apple removed Epic Games from its App Store. Recently, Epic Games CEO, Tim Sweeney, responded to Apple’s new request for compensation for breach of contract. Sweeney said that Apple called the legal dispute “just a basic disagreement about money”, which shows that Apple “has ignored the founding principles of the technology industry”. However, he did not clearly indicate what these founding principles are. He also believes that Apple is “posing for the court”. 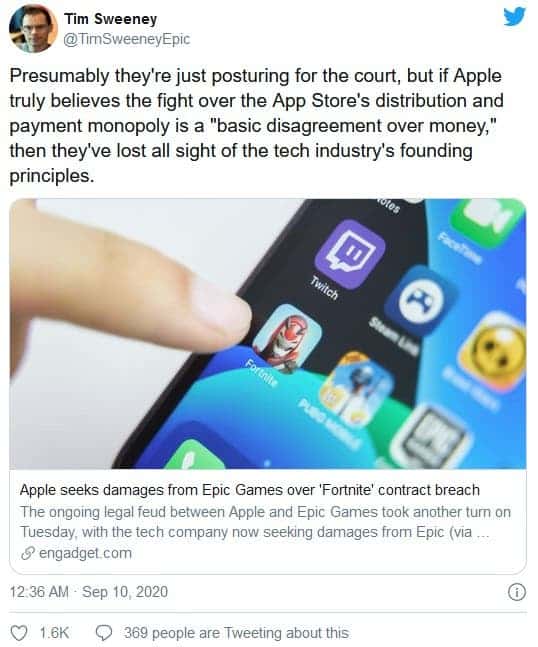 Sweeney then referred to Epic’s “Nineteen Eighty-Fortnite” commercial. He explained that this ad was designed to show that Apple is now an “all-round” company that governs the terms of the user. Apple replaced IBM as the “all-round” company they feared nearly 30 years ago, and it is “using this position to exercise control and squeeze money.” 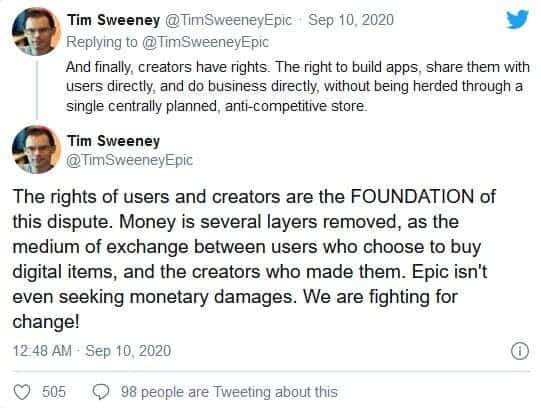 Later, he reiterated some of Epic Games’ reasons for opposing Apple’s App Store policy, saying it was fighting for rights for creators. Sweeney finally opposed the whole disagreement about money. Epic didn’t even seek monetary compensation. He called this a more fundamental struggle for change.

At present, Epic Games’ developer account has been terminated, and the company has applied for a preliminary injunction to allow “Fortnite” to return to the App Store and restore the right to use its developer account. At the same time, Epic Games also refused to remove the direct payment option, but this violates Apple’s App Store policy. A preliminary injunction hearing will be held at the end of this month.

IPHONE 11 IS THE TOP-SELLING SMARTPHONE IN SEVERAL MARKETS

The new iPhone 12 smartphones will offer users 5G support this year. And the smallest 5.4-inch model will be quite functional and accessible to a wide audience.
Source/VIA :
Twitter