Following the schedule, the much-awaited Realme Narzo 20 series smartphones have been launched in India just a few minutes ago. There are three models. But they are made for different customer groups and provide quite different performance. Say, the Narzo 20 and Narzo 20A come with a waterdrop display. But the Narzo 20 Pro adopts a hole-punch design. The mentioned former two models sport a triple-camera, while the Narzo 20 Pro features a quad-camera. The latter also has a 90Hz display and supports 65W fast charging.

Alongside the Realme Narzo 20 series, OPPO also released Realme UI 2.0. As the name implies, it is its next-generation custom skin.

The Realme Narzo 20 runs on Realme UI based on Android 10. There is a 6.5-inch HD+ screen with a 20:9 aspect ratio. Under the hood, the phone hosts an octa-core MediaTek Helio G85 SoC. It is supplemented by 4GB of LPDDR4x RAM. As for the storage, it comes in two versions of 64GB and 128GB. But they can be expanded to up to 256GB through the microSD card slot. The phone can boast of a 6,000mAh battery, which supports 18W fast charging. 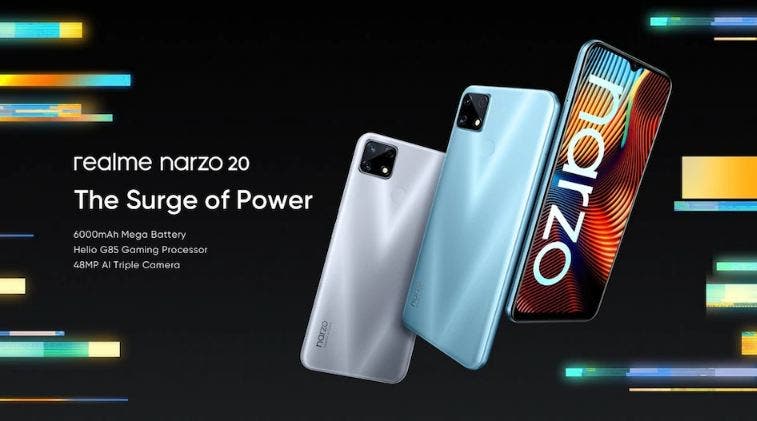 As said, it sports a triple-camera, which consists of a 48-megapixel primary sensor (f/1.8), an 8-megapixel ultra-wide-angle lens (f/2.3) that has a field of view (FoV) of 119 degrees, and a 2-megapixel macro sensor (f/2.4). On the opposite side, we can find an 8-megapixel selfie camera with a five-piece lens. The latter supports AI Beauty, HDR, Panoramic View, and Timelapse features.

The Realme Narzo 20A runs on Realme UI based on Android 10 like its siblings. It features a 6.5-inch HD+ display with a 20:9 aspect ratio. However, this handset is protected by Corning Gorilla Glass 3 on top. The processor inside is the octa-core Qualcomm Snapdragon 665 SoC, which is paired with 3GB and 4GB RAMs. There are two storage options you can choose from – 32GB and 64GB. Both can be expanded to 256GB via the microSD card slot. The Realme Narzo 20A comes with a 5,000mAh battery, which also supports reverse charging. 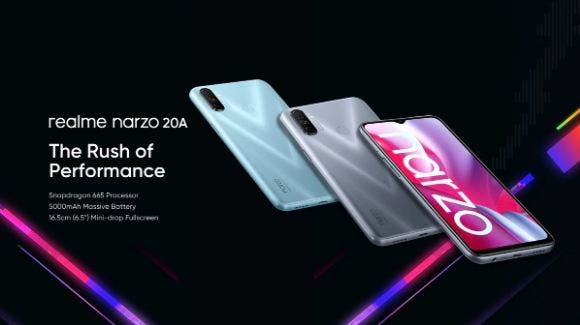 Like the aforementioned models, the Realme Narzo 20 Pro runs on Android 10 with Realme UI on top. It has a 6.5-inch full-HD+ Ultra Smooth display with a 20:9 aspect ratio and a 90Hz refresh rate support. It is also protected by a Corning Gorilla Glass and comes with a 120Hz touch sampling rate as well as 480 nits of peak brightness. Under the hood, we can find a MediaTek Helio G95 SoC. It is coupled with 6GB and 8GB LPDDR4x RAM. The Realme Narzo 20 Pro comes with up to 128GB of UFS 2.1 storage that is expandable via microSD card (up to 256GB) through a dedicated slot. Realme has offered a 4,500mAh battery on the Narzo 20 Pro. It supports 65W SuperDart Charge fast charging technology. 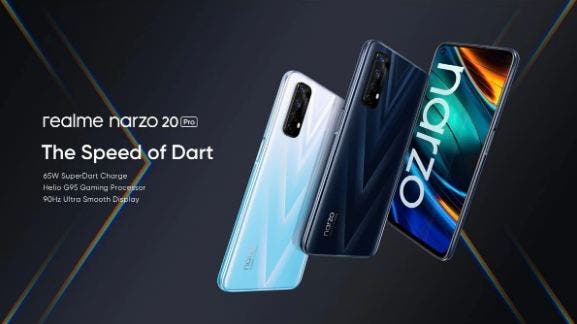 Its connectivity options include 4G VoLTE, Wi-Fi 802.11ac, Bluetooth v5.0, GPS/ A-GPS, and a USB Type-C port. The fingerprint sensor is placed on the side.

The Realme Narzo 20 and Narzo 20A are available in Glory Silver and Victory Blue colors, while the Narzo 20 Pro comes in Black Ninja and White Knight colors.