A couple of weeks ago, Google unveiled its 2020 mid-range in the form of Pixel 4a. We have to say that the device took more time than expected due to all the problems generated with the COVID-19 pandemic. Now, the company is running to release a new 5G variant alongside the highly-anticipated Pixel 5. Today, the full spec sheet for the new stock Android 5G smartphone appeared and it’s rather similar to the upcoming Pixel 5 smartphone.

The Pixel 4a 5G will be slightly bigger than the Pixel 4a variant and even bigger than the Pixel 5. It comes with a 6.2-inch display with 2,340 x 1080 pixels of resolution. It’s an OLED panel with HDR and Corning Gorilla protection. Unfortunately, it still comes with a regular 60Hz screen refresh rate. Now a big surprise, as Google does not follow trends in this industry.

The handset comes with just two microphones, but will retain the 3.5mm headphone jack that is available on the vanilla Pixel 4a. The phone build is based on polycarbonate just like the standard handset. It also comes with a capable 4,885mAh battery with 18W fast-charging and wireless charging. We have to say that it’s amazing to see that Google is finally addressing the problem of having small batteries on Pixel smartphones. Users won’t suffer with a battery of this size. The handset is a bit thicker and heavier, but I see no problem with that if we have a decent hardware inside. It weighs 168g and its 8.2mm thick. 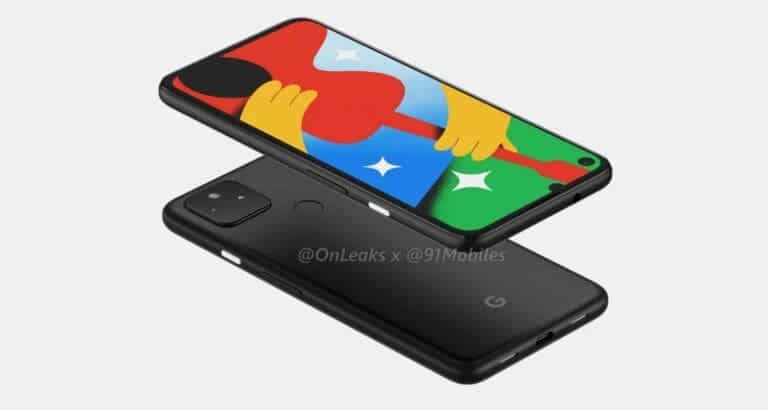 Under the hood, the handset boasts the Qualcomm Snapdragon 765G chipset. It’s paired with up to 6GB LPDDR4 RAM and up to 128GB of Internal Storage. This is exactly the same chipset found on the Pixel 5. However, the premium model is packed with 8GB of RAM. It’s a bit strange to see the Snapdragon 765G on both smartphones, especially now that the Snapdragon 750G is available.

On the camera department, we have an 8MP punch-hole sitting on the display. Moving around to the back, we have a 12.2MP primary camera with Optical Image Stabilization and a 16MP Ultra-Wide angle lens. It may not be a jaw-dropping setup as we see from other Android OEMs. However, the Google’s magic comes from Google Camera app. This setup is also capable of recording 4K @ 60 fps shots and 1080p @ 30fps  on the front camera.

Other features include a single nano-SIM slot, Wi-Fi 5, Bluetooth 5, NFC, GPS with GLONASS, Galileo, QZSS and BeiDou. Moreover, whe have a USB Type-C port based on the USB 3.1 Gen 1 standard. Last but not least, the phone ships with Android 11.

Next OxygenOS 11 Beta 2 now available for the OnePlus 8