Back in February 2019, Samsung launched its affordable tablet dubbed Galaxy Tab S5e with a 10.5-inch AMOLED panel and Snapdragon 670 chipset. A couple of months after, the tablet made its way to both the Chinese and Indian markets. The Tab S5e was originally launched with Android Pie out-of-the-box. A couple of months ago, Samsung rolled out the Android 10 update to the tablet and now, it’s time for the One UI 2.5 software.

You heard it right. Samsung has now started seeding the latest One UI 2.5 software to the tablet. Here’s what you need to know about the new rollout.

The new One UI 2.5 update carries the firmware version T720XXU1CTI1. The new rollout brings the One UI 2.5 update to the device. At the time of writing this, the update is currently available in Europe and the Middle East. We have heard reports about the update hitting South Korea, China, and some other Asian countries. 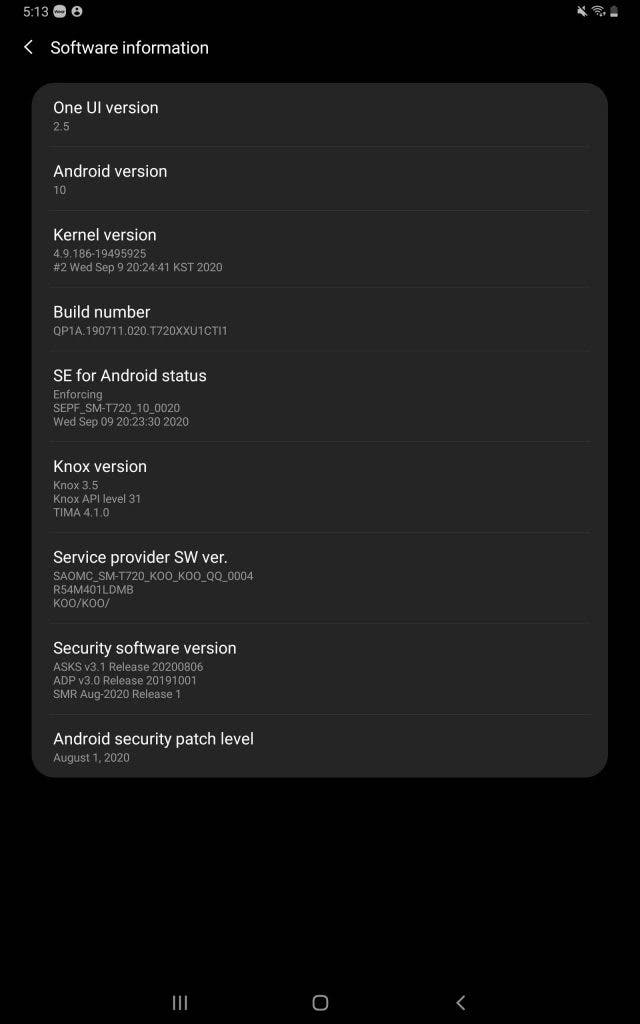 We’re expecting more regions or markets to follow the suit soon. It is worth noting that the changelog only mentions the device stability improvements and new enhanced features. Well, One UI 2.5 is indeed a part of the rollout making it a sneak update. Furthermore, the update also includes the August 2020 security patch update.

If you are using the tablet and are residing in the mentioned location, then you might have already received the update notification. If that’s not the case, then you can manually check for it by heading over to Settings>>Software Update>>Download and Install. If that does not work, then worry not, the update is rolling out in batches. This means that you will get the update soon.

it is also worth noting that Galaxy Tab S5e in some markets is also receiving September 2020 patch but sadly, there is no sign of One UI 2.5.

Apart from this, Samsung has also rolled out the latest September 2020 security update to its Note 10 duo. Furthermore, the smartphone maker has also launched the Galaxy S20 FE smartphone recently. The device comes with features such as 120Hz display, flagship chipset, 25W fast charging, wireless charging, 6GB RAM, and a $699 price tag. It also comes in a bunch of different color options allowing consumers to choose from.