Huawei has since confirmed the launch date of the Mate 40 series. According to Huawei’s consumer business CEO and Huawei’s executive director, Yu Chengdong, the company’s latest flagship will arrive on October 22nd. According to reports, this series will be Huawei’s most powerful smartphones in the Mate history. Information from popular Twitter leakster, @RODENT950, shows that this series will have at least three versions. We expect the Huawei Mate 40 (codename: Ocean), Mate 40 Pro (codename: Noah), and Mate 40 Pro+ (codename: Noah Plus). 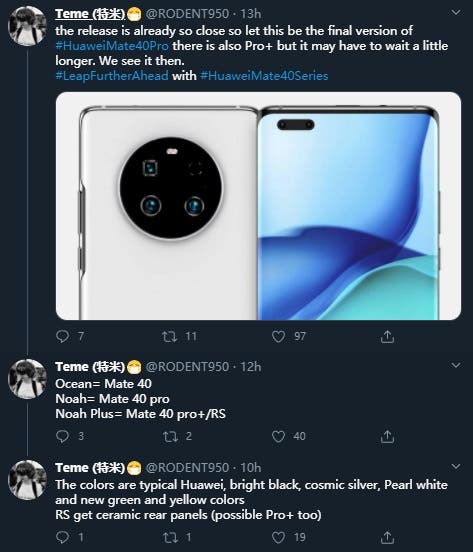 Regarding the colours of the Mate 40 series, Huawei will use the regular “Huawei colours”. We will have black, silver, white and green colours. However, this series will introduce a new yellow colour option. It is worth mentioning that Huawei Mate 40 Porsche Design Edition (and possibly Pro+) will get a ceramic back shell design. According to previous news, Huawei Mate 40 series will use a 66W fast charging technology. It will also use the HiSilicon Kirin 9000 SoC and adopts a large curvature dual punch hole waterfall screen.

Next OnePlus 8T Live Wallpaper is usable any Android smartphone

Huawei Mate 40E with Kirin 990E gets a launch date