IDC mobile device tracker research manager, Jitesh Ubrani, said that if it were not for the shortage of parts, notebook shipments would have been even higher in the third quarter. In addition, he also indicated that in the quarter, gaming laptops, Chromebooks, and netbooks that support data traffic all performed well and even set new highs.

The shortage of parts will not be going away anytime soon. This is because the initial business plan did not anticipate the demand. “The PC industry rode into the third quarter with a sizeable backlog of unfulfilled orders,” said Linn Huang, research vice president, Devices and Displays at IDC. “And it appears the quarter will end under the same auspices. Given that the shortages have been due more to a shortfall of business planning than a technical glitch, we do not anticipate a sudden surge in capacity. Consequently, this backlog will likely carry into 2021.” 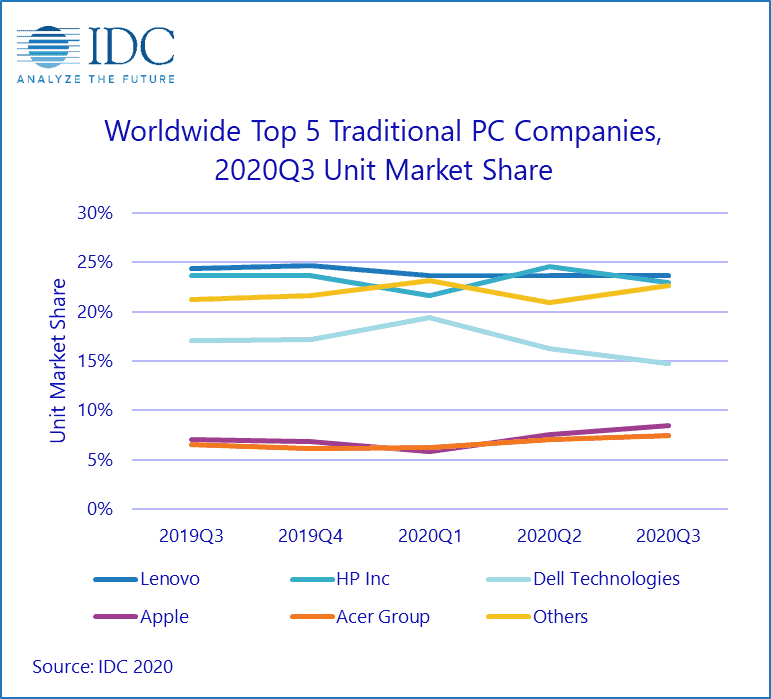 In a regional analysis, the Asia Pacific (excluding Japan) (APeJ) traditional PC market grew by only single digits. However, this result is higher than IDC’s forecast. The traditional PC market in the Canadian market is still very active and has achieved growth for 17 consecutive quarters.

In Europe, the Middle East, and Africa (EMEA) region, traditional PC shipments in the third quarter achieved single-digit growth. Furthermore, the quarterly growth of notebook computers exceeded the decline of desktop computers, so it grew.

In Japan, the GIGA project enables students across the country to receive PCs and tablets for online learning. This has helped to maintain the steady growth of the traditional PC market.

Previous A Magnetic charger for the iPhone 12 has been revealed