UMIDIGI is well known in the manufacturing of smart devices which offer great value for money. The company will soon start their 9th Anniversary Sale on AliExpress, with up to 50% off offers, running from 00:00 PDT October 16th to October 17th. During the sale, two new UMIDIGI phones UMIDIGI BISON and A9 Pro open their first global sale for a first time with big discounts. For those who follow this brand should know, that this is the right time to get a new phone. And which one could it be ?

UMIDIGI BISON, a camera smartphone with a rugged yet sleek design, is a breakthrough UMIDIGI made in the camera phone segment. The BISON comes with a 48MP Sony quad rear camera, which includes a 48MP main camera, 16MP ultra-wide angle camera, 5MP depth lens and a 5MP macro lens. On the front, it features a Sony 24MP selfie camera. 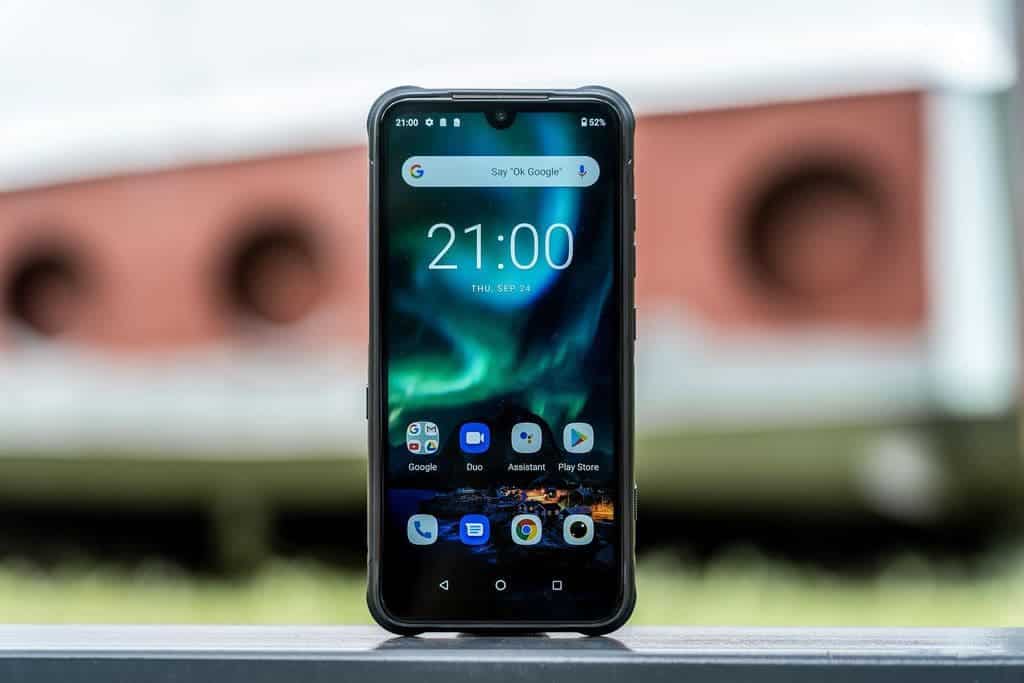 As a rugged phone also, UMIDIGI BISON is light and thin, but also comes with a rugged IP68 and IP69K rating, making the phone be well protected from water, sand and dirt. For sport and outdoor lovers, BISON also offers many helpful features like a barometer, a lanyard hook and two independent customizable buttons. Besides that, BISON sports a 6.3” FHD+ full screen protected by Corning Gorilla Glass. The phone is powered by Helio P60 with 6GB of LPDDR4X RAM and 128GB of UFS 2.1 storage as well a liquid cooling system. All of thats promise you a smooth experience. 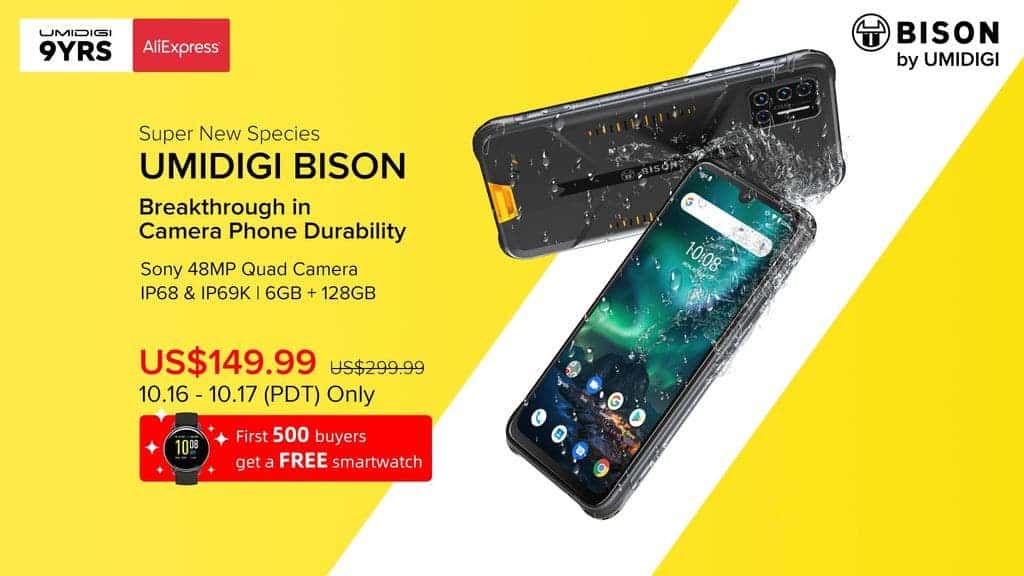 UMIDIGI BISON  will be only $149.99 on AliExpress during UMIDIGI 9th Anniversary Sale. And the first 500 buyers can get free smartwatches UMIDIGI Uwatch 2S too. So make sure, you don’t miss the first sale deal.

Besides BISON, UMIDIGI A9 Pro is also on first sale from just $119.99 in this period. The A9 Pro is an incremental update to the popular UMIDIGI A7 Pro, including better cameras, a more powerful processor and a new infrared thermometer sensor to take body temperature. To make the specs clear, let’s show you the comparison between the A9 Pro and Samsung’s entry-level phone Galaxy A31. 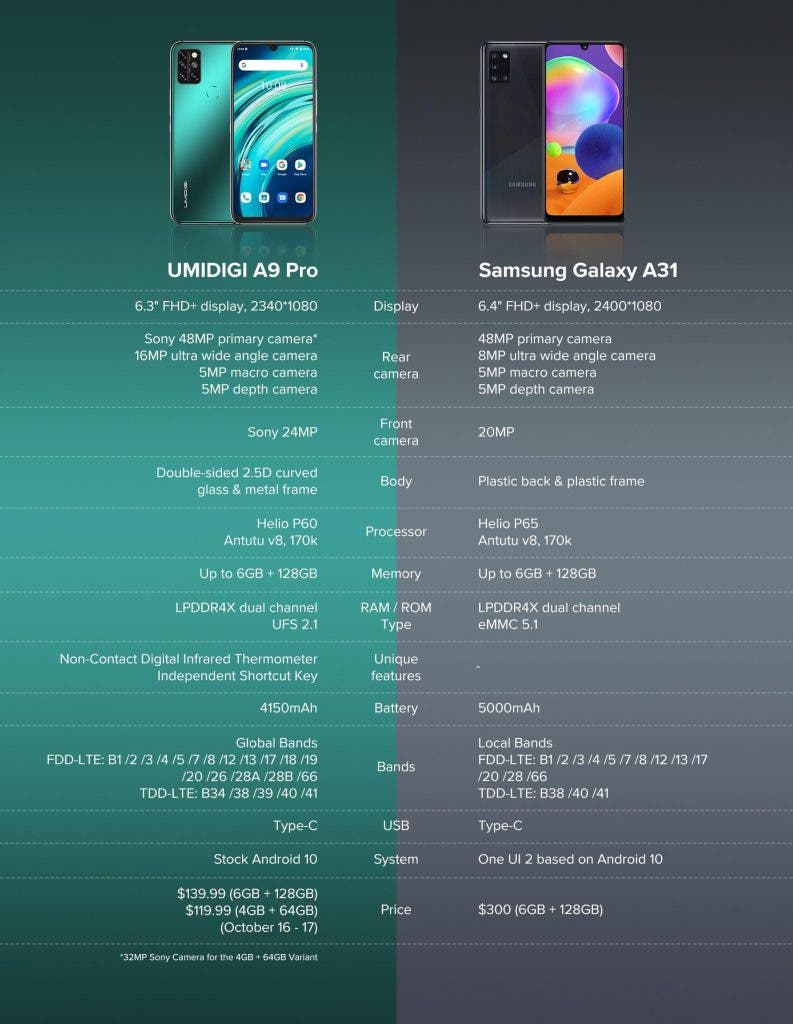 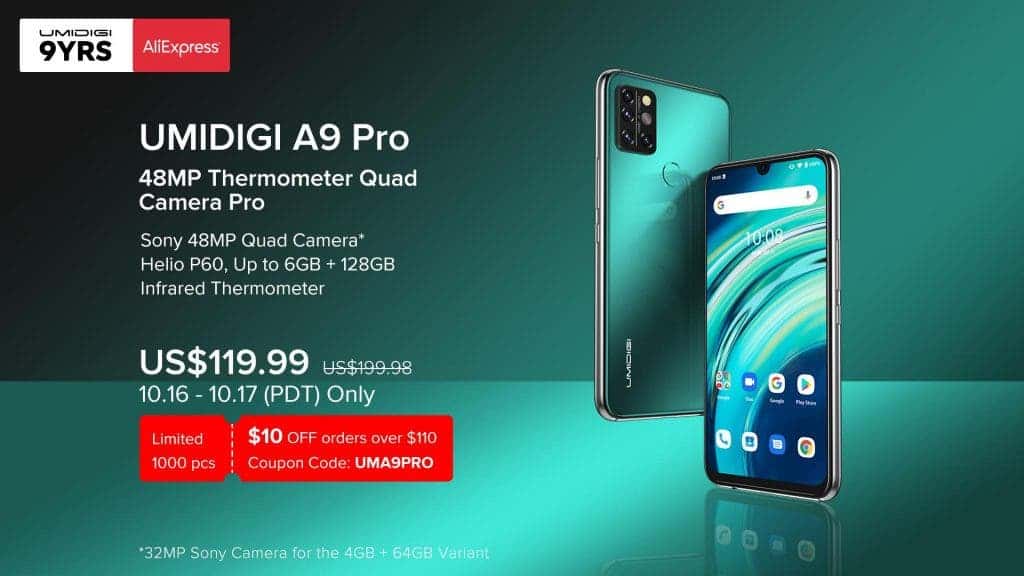 Overally, you can look forward to these following deals for the these latest UMIDIGI smartphones during the sale from 16th to 17th October (PDT).