Oppo is constantly pushing new smartphones to keep up with the competition. Now, the company seems to be gearing up to reveal a new model. For now, the only thing we know about it is that it’s dubbed OPPO PERM00. It received approval from the MIIT authority of China just recently. Now, the upcoming smartphone appeared in the database of the TENAA authority. With these two certifications, the handset surely is moving on for an official release in China pretty soon. Thankfully, TENAA has disclosed pretty much all the specifications of the upcoming handset. For now, the big mystery is its marketing name.

The OPPO PERM00 will keep Oppo’s strategy of filling the market with 5G smartphones. Nowadays, it’s rare to see a new smartphone landing in China without proper 5G connectivity. The handset flaunts an LCD with a 6.5-inch and an FHD+ resolution with 2,400 x 1,080 pixels and a 20:9 aspect ratio. The handset comes with a rated battery capacity of 4,910mAh, it probably has a 5,000mAh typical capacity. Under the hood, we have a 2GHz unnamed Octa-core processor. It’s paired with 6GB of RAM and 8GB of RAM. Storage-wise, we’ll have options with 64GB, 128GB, or 256GB of Internal Storage. On the software front, we have Android 10 OS, probably with ColorOS 7.2 running on top.

The images reveal a left-aligned punch-hole that serves as a house for the 16MP selfie snapper. Moving around to the back, we have a rectangle-shaped camera setup that follows the 2020 trending design guidelines. The Quad-Camera array comprises a 48MP primary camera, an 8MP secondary, and two additional 2MP shooters. We believe that the 8MP unit is an ultra-wide module, while the other two 2MP sensors probably stand for macro focus and depth sensing. 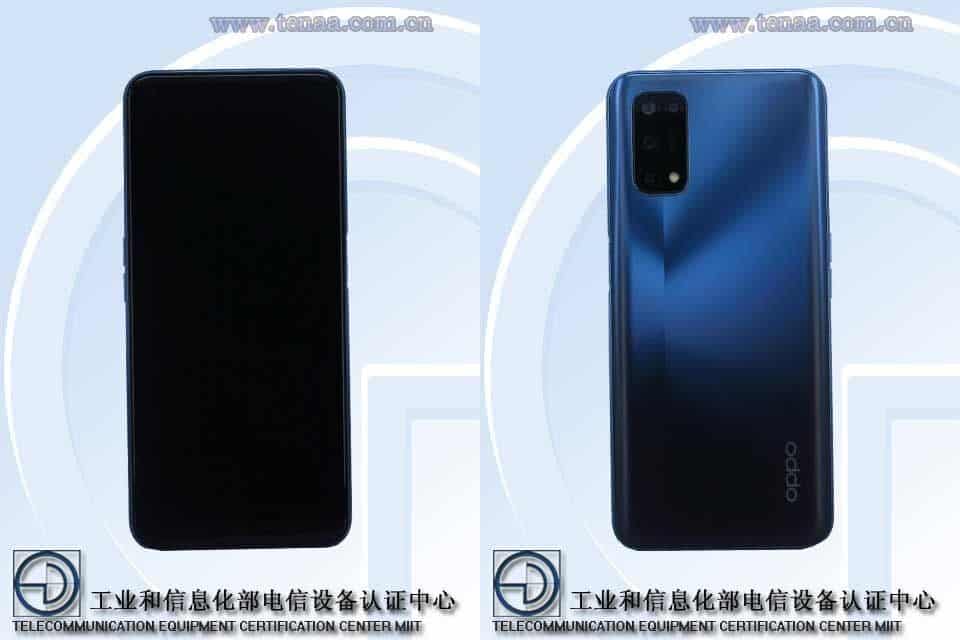 Despite the high storage capacities, the phone has a microSD card slot for adding up to 256GB of Internal Storage. The device also has a side-mounted fingerprint scanner. The LCD does not allow it to go under the display. Moreover, companies are slowly leaving the rear to keep the design consistency. The phone will reach China in Green, Gray, and Blue colorways. Oppo will surely make a distinct name for each one of these colorways.

Unfortunately, Oppo is yet to give an official statement about this new handset. Considering the number of certifications, we believe that we will not need to wait much longer to know the device’s official name.