Samsung is currently working on a bunch of new chipsets for its next generation of smartphones. We’ve been hearing about the Exynos 1080 and Exynos 2100 chipset for a couple of months now. Both the chipsets fall under the flagship or top-end category. Well, it looks like the South Korean giant is all set to unveil the Exynos 1080 SoC in Shanghai.

Samsung has now announced the unveiling of the chipset on its official Exynos Weibo channel. The brand has posted a teaser image that clearly mentions the Exynos 1080 chipset. Furthermore, the image also reveals the launch date which is set for November 12. This is not the first time we’re hearing about the chipset from the brand. 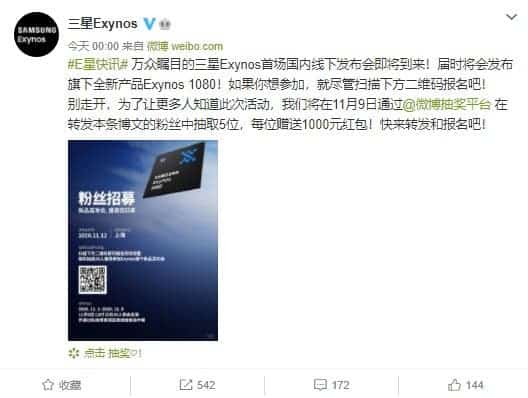 Earlier this month, Samsung posted a video with the theme “Inspiring Innovation and Enterprising Sword 2030” on its Exynos account. The video revealed that the chipset will release in the second half of the year. Well, Samsung is clearly sticking with its previously-teased schedule.

Samsung Exynos 1080 chipset: Everything we know so far!

As mentioned earlier, Exynos 1080 chipset is going to be the company’s flagship offering for its Galaxy devices. The Exynos 1080 SoC will be manufactured over a 5nm fabrication process making it the company’s first chip to use the 5nm process. For those who’re unaware, Apple’s latest A14 Bionic chipset also makes use of the same fabrication process. Since we’re looking at a 5nm process, we’re expecting the SoC to feature low energy consumption along with higher performance.

The smartphone maker has been criticized a lot lately for incorporating Exynos chipsets on its flagship devices. For those who’re unaware, the current high-end Exynos chipset falls short in performance when compared with Qualcomm’s flagship offering. With the launch of Snapdragon 865+, the performance gap has widened drastically. It would be interesting to see how well the Exynos 1080 chipset performs in real-life usage.

Previous Google Meet gets Change Background for Video Calls, How to Use