DxOMark is one of the ratings around which there is a lot of controversies and it seems to many that the testers of this platform are not playing an entirely fair game. This laboratory has taken on the role of a kind of guiding beacon that ranks smartphones based on the capabilities of their cameras. As a result, the consumer knows that Huawei Mate 40 Pro has the best camera on the market, the iPhone is not as good as its competitors in photo quality, and Google’s Pixel has managed to lose its credibility.

DxOMark has ranked the best smart speakers available on the market

And recently, DxO experts have become bored because they are limited only to the niche of mobile cameras. So, they are expanding their activity and began testing smartphone displays. Another niche where DxOMark will begin to set the standard and define the best products on the market is smart speakers. The first 12 “test products” from 11 brands have already been studied.

Experts divided all speakers into two groups: up to 200 euros and 200-499 euros. Subsequently, a third niche will appear: speakers costing over 500 euros. The Amazon Echo Studio became the leader among the available speakers, the Xiaomi Mi Smart Speaker HD took silver, and the third place was taken by another Xiaomi product – Mi Smart Speaker Battery Edition.

In the segment of smart speakers with a price tag of more than 200 euros, the Harman Kardon Citation 200 became the leader, the Google Home Max speaker took the second position and the Bose Home Speaker 500 was the third.

In the recent review of DxOMark, Google Pixel 5 managed to score 120 overall points for cameras. Individually, the device received 129 points in Photo, 49 in Zoom, and 107 in the Video aspect. You can find the in-depth score of the camera performance in the image above. If you look at the in-depth review by DxOMark, you will come to know that Pixel 5 received praise for churning out images with good detail and texture. The camera benchmark also mentioned pleasant colors and accurate autofocus. Sadly, the device seems to have visible noises even in daylight photography. Moving on to the low-light performance, Pixel 5 has been given okayish feedback.

In the zoom test, Google Pixel 5 managed to score a mere 49 points; which make sense considering there is no telephoto lens. The lack of a telephoto lens reduced the overall camera score of the smartphone. In this test, DxOMarkhas tested zoom capabilities by a wide-angle lens as well. Well, it is not recommended to cross the 2x threshold if you want good images. Lastly, we’re looking at a video in which the device once again received praise for autofocus. The stabilization during the 4K 30fps and 60fps recording also seemed to have impressed the DxOMark. 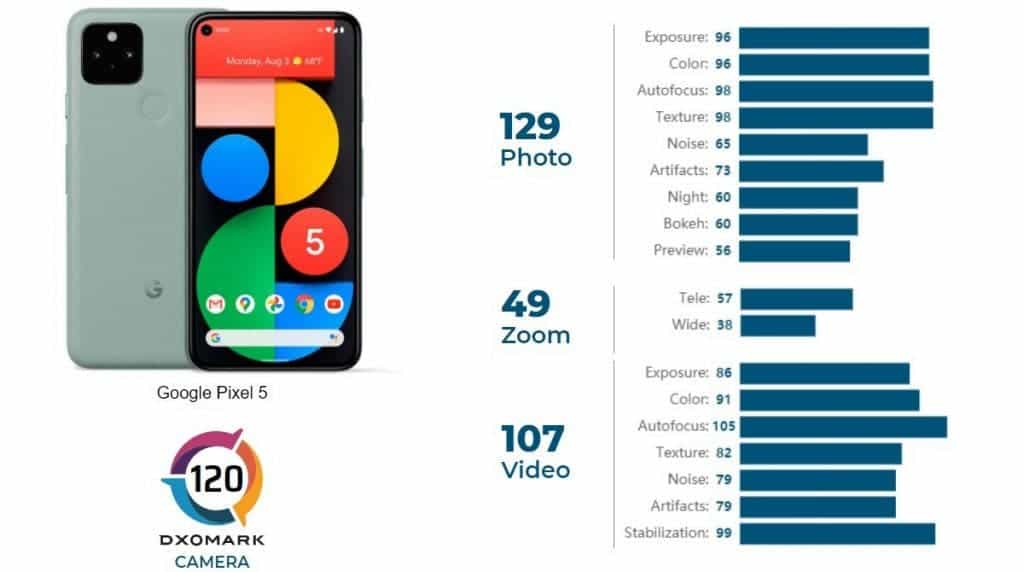