OnePlus recently launched the OnePlus 8T series providing spectacular specifications at compelling prices. In a step forward, the Chinese smartphone maker has even developed the new OnePlus 9 if we believe the recent Geekbench listing. After appearing in multiple leaks, the OnePlus 9 made a mark on Geekbench with 6G RAM. It is spotted running an octa-core CPU with a base frequency of 1.8GHz. 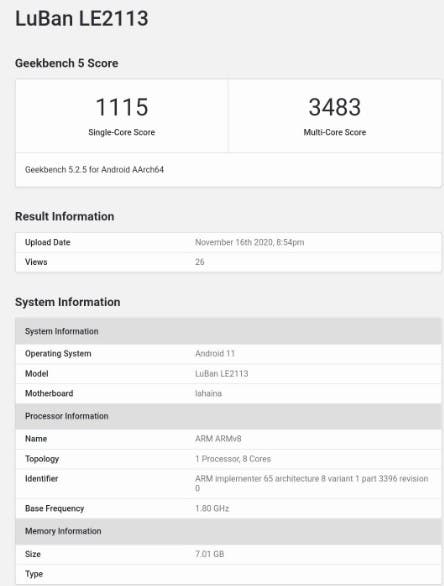 OnePlus 9 bearing model number LE2113 runs on Android 11. The CPU with octa-cores will be part of the upcoming Snapdragon 875. The smartphone scored 1115 points in the single-core test and 3483 in the multicore test. Moreover, the OnePlus 9 Pro with model number LE2117 was spotted at Geekbench yesterday with similar specifications. The elder sibling came out with 2733 points in the multi-core test and 1122 in the single-core test.

OnePlus 9 series could debut in March next year, and it could arrive on both Verizon and T-Mobile in the US.

However, the smartphones could come with 65W fast charging as like the OnePlus 8T. There are only two OnePlus 9 models launching in the coming time.

OnePlus 9 will apparently have a big display than the OnePlus 8 and 8T series. However, there’s no information regarding the actual dimensions of the smartphone’s display. There’s hardly any other information about both the smartphones apart from the details listed on Geekbench. We expect more information to leak via rumors and reports in the coming time.

Qualcomm Snapdragon 875 will feature a single Cortex-X1 performance core running at 2.84-GHz, three Cortex-A78 cores at 2.42GHz, and four Cortex-A55 cores with 1.8GHz clocking speed. There will be a total of 20-25% performance boost inc comparison to its predecessor – Snapdragon 865.

The next-generation Qualcomm chipset is launching on December 1 at Qualcomm’s conference in Hawaii.