As you might know, the Samsung Galaxy S21 series is expected to launch early next year. Now in the latest leak Galaxy S21 with model number SM-G996U is spotted on the GeekBench with some key specification. The smartphone rakes 1120 points in the single-core test and 3319 points in the multi-core test, which is better than the Galaxy S21 Exynos variant score. However, Exynos powered Galaxy S21 with model number SM-G996B was also spotted on GeekBench. 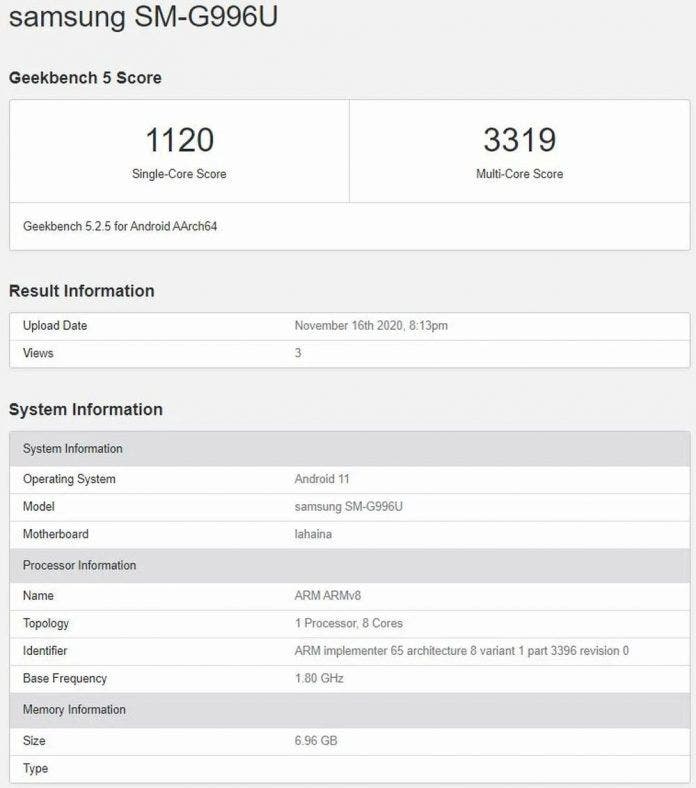 It may feature a 6.7-inch OLED LTPS panel with FHD+ resolution with 120Hz refresh rate. There will be two variants of the phone one with Snapdragon SoC that will be sold in China and the US. The second variant of with Exynos SoC which will be sold in all markets except the US and China. The smartphone may pack a triple-camera setup at the back with a 12MP primary camera, a 12MP ultrawide camera lens, and a 64MP telephoto camera. Galaxy S21 might have a 4800 mAh battery with 25W fast charging support. It will be running on Android 11 based Samsung One UI 3.1 skin over the top.

Talking about the Samsung Galaxy S21 ultra, there are some rumors and reports which suggest that the smartphone will come with a 16GB RAM variant.

Next Goodbye Galaxy Note? Samsung Galaxy Note 21 will not be launched