Zhao Ming, CEO of Honor, posted an open letter on Weibo, confirming that the company will soon release its first product after splitting from Huawei.

He did not specify what kind of product it is and when it will appear on the market. Earlier, there were reports that the company could release the Honor V40 series smartphones around the beginning of 2021.

The letter, which was written in honor of Honor’s seven-year anniversary, Zhao Ming thanked users, distributors, retail partners, suppliers and manufacturers. It was also confirmed that the company will hold an annual fan meeting next month to discuss the future of the Honor brand. The company is expected to announce the upcoming new products at this event. 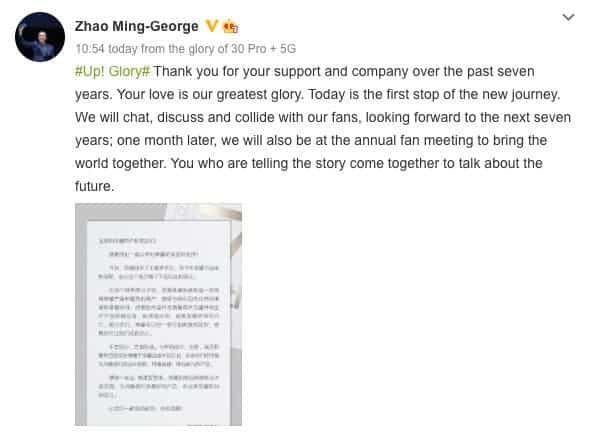 The company is currently in the process of cleaning up its supply chain as well as expanding the brand’s presence in the retail market. The company has already opened stores in cities such as Chengdu, Lanzhou, Wuhan and Xiamen; and plans to continue opening new stores.

Now we know for sure that there will be three models in the series. Honor V40, Honor V40 Pro and Honor V40 Pro+. Alas, the specifications are not disclosed. Nevertheless, something is already known about them. So, the devices will support fast charging with a power of 66 W; and will also receive displays curved on the sides. There is still no exact data regarding the SoCs used. Some sources talk about the use of Kirin SoC, others about MediaTek SoC. It is possible that both are right. Different models will have platforms from different manufacturers.

Next Samsung may not cancel the Galaxy Note lineup after all