Oukitel is a Chinese phone brand based in Shenzhen, China, with massive 13 years of experience in the rugged phone manufacturing industry. And Oukitel has certainly established itself as one of the big players in the industry.  The brand is also synonymous with big battery phones. Having manufactured and launched phones with some of the largest battery capacities in the world, there is plenty to choose from. So which ones are the best top 6 Oukitel smartphones with the big battery perk ? 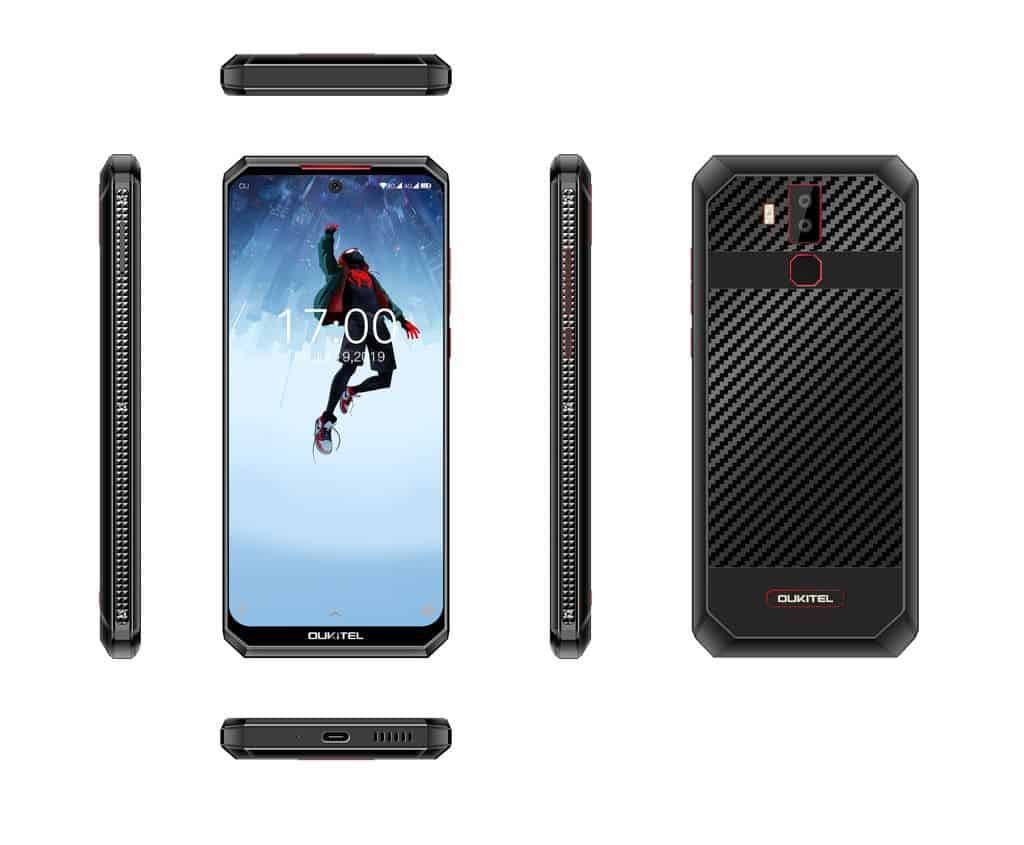 Oukitel K13 Pro remains the largest battery outdoor smartphone manufactured by Oukitel. The K13 Pro packs a massive 11.000mAh battery, the largest we have ever seen on any smartphone. It also supports fast charging, with a charger of power rating 5V/3A, so full power can be restored in just 2 hours 20 minutes.

Although the battery capacity is the most impressive feature of the Oukitel K13 Pro, it has some other interesting features, such as the 6.41-inch o-notch display, MediaTek MT6762 octa processor, 6GB RAM, or 64GB internal storage. 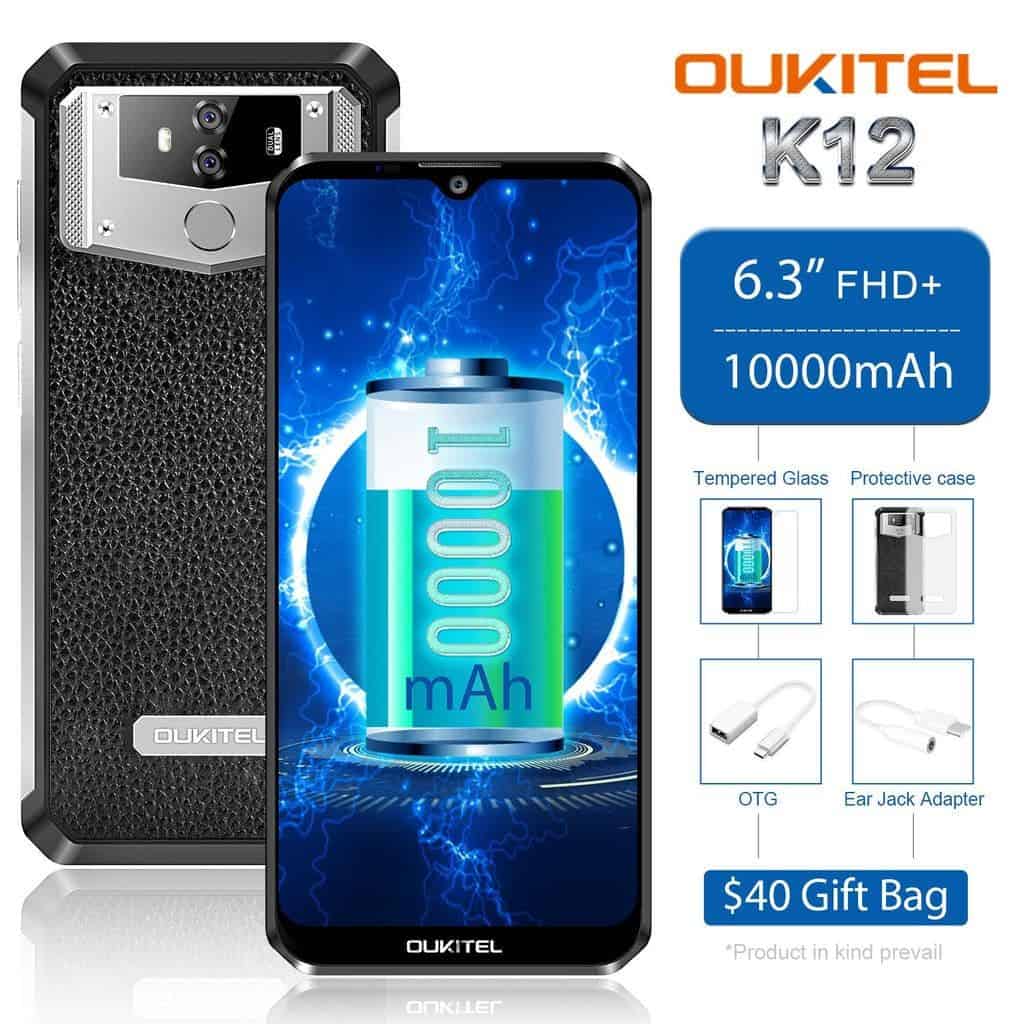 As one of the classic K-series products, Oukitel K12 comes with the signature large battery. With a monstrous 10.000mAh battery capacity it’s easily one of the largest battery smartphones on the market. Just like all the other models in this series, K12 supports 5V/6A fast charging. So the battery can be fully charged in just 2 hours 20 minutes.

Oukitel K12 bears the classic leather-on-metal look that has characterized the K-series of Oukitel phones. The idea behind it is to create a phone durable for the outdoor usage and at the same time keep it classy enough to be used in a white-collar work environment.Its other features include a 6.3-inch FHD+ punch-hole display , MediaTek P35 chipset, 6 GB RAM, 64 GB of internal storage or 16MP main camera. 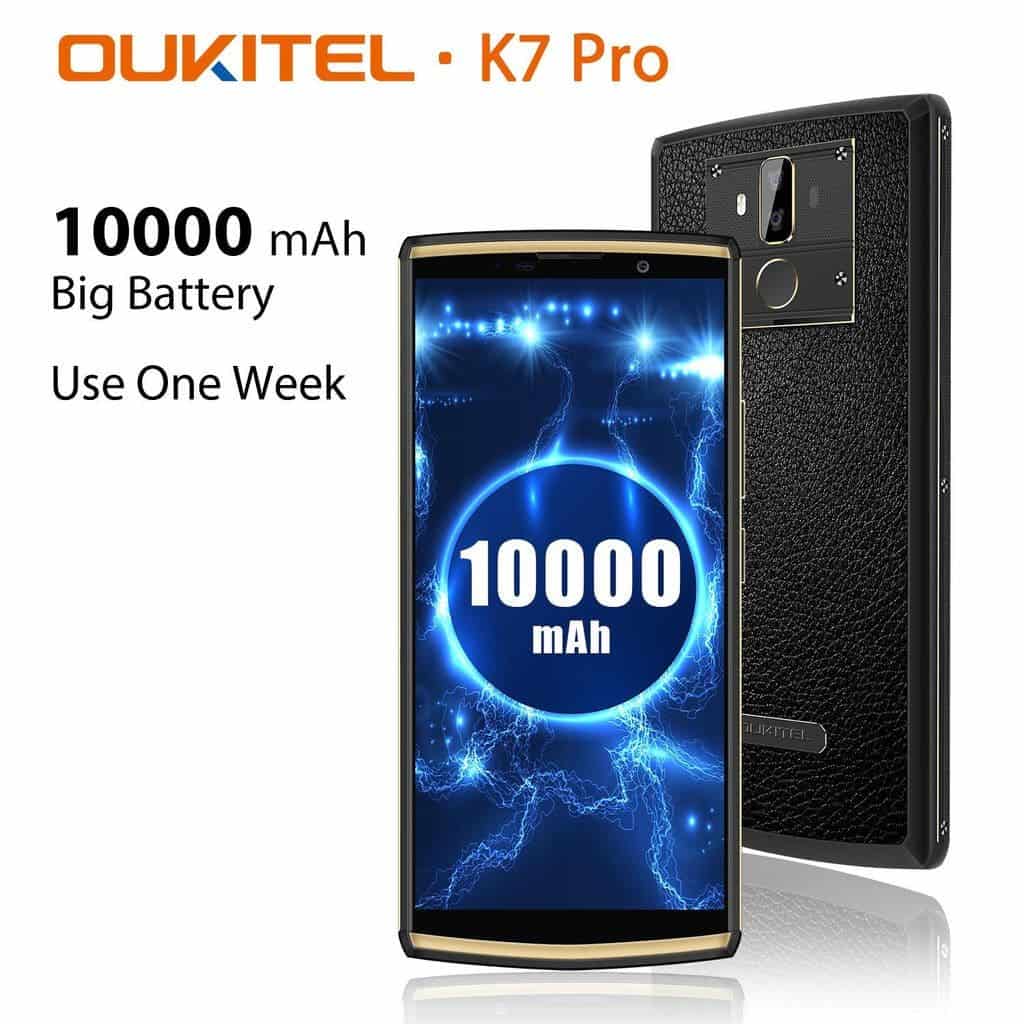 The K7 Pro is a successor of the K12, launched in the fall of 2019 andd once again comes with a massive 10.000 mAh battery. And with 9V/2A fast charging the battery can be fully charged in 3 hours. The design features the unique K-series leather-on-metal design look.

Other interesting features of this model are for example 6-inch display with 1440 x 720 pixel resolution, 4GB RAM, 64GB internal storage or the MediaTek MT6763 processor.  K7 Pro is another classic model built for the great outdoors, but will fit seamlessly in other environments too. 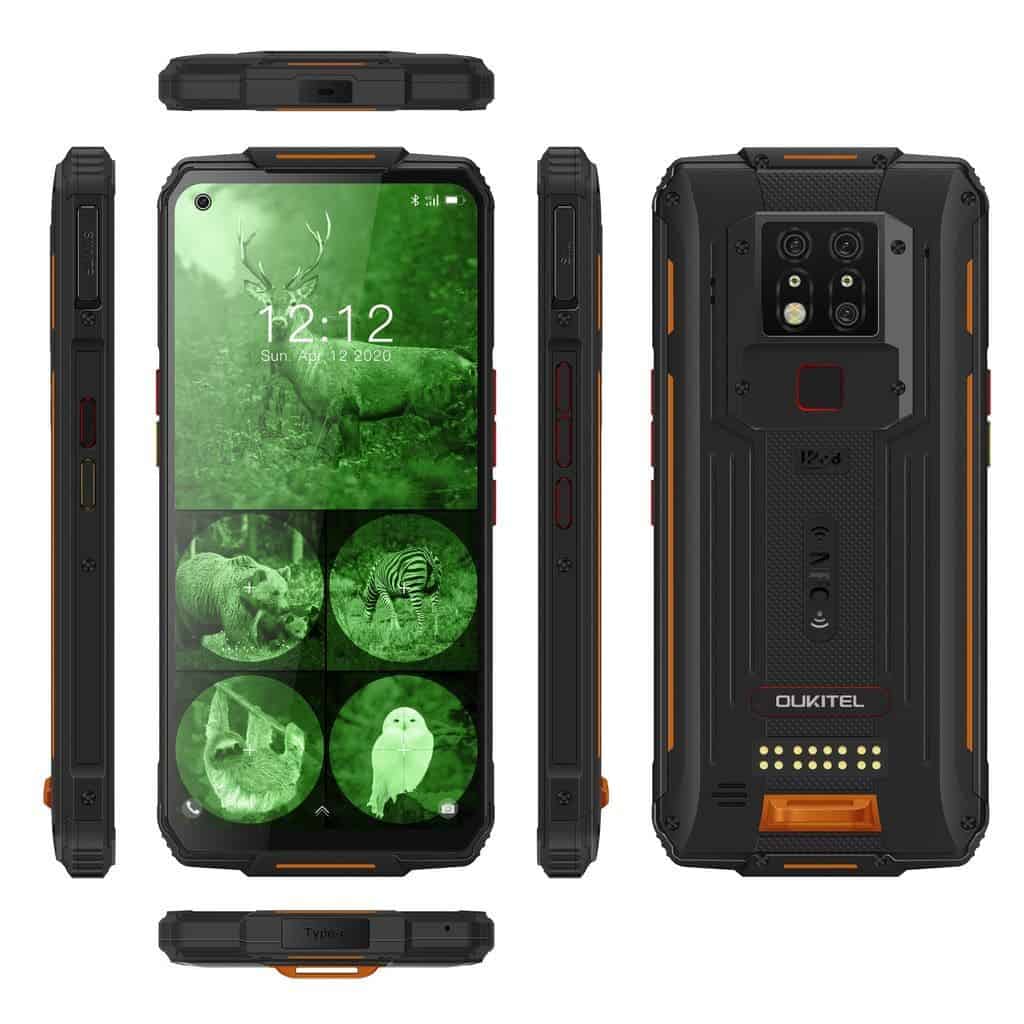 Oukitel WP7 was launched on May 26th and This smartphone came with a lot of amazing features. Such as big 6.53-inch display, built-in infrared camera, multi-module support system with a UVC sterilizer &  flashlight module. This model also comes with a 48MP triple rear camera, 8GB RAM or 128 GB internal storage, just to mention a few.

But what makes WP7 stand out among its fellow contemporaries, is its massive 8000 mAh battery. WP7 is a feature-packed rugged phone with big battery and 18W fast charging, meaning the battery can be fully charged under 3 hours. 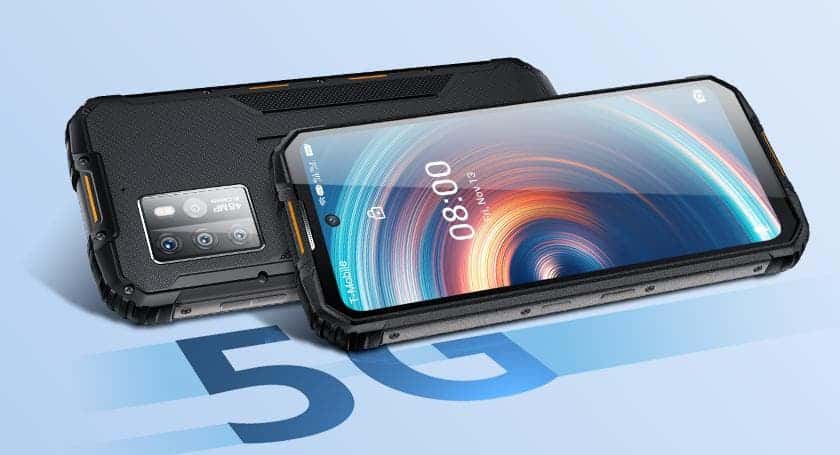 The self-dubbed “Battery King” smartphone is the first 5G rugged phone from the Oukitel brand. And plenty of good first impressions with it, hailed by many websites as one of the best rugged devices currently available.It was launched in November and it boasts features such as 6.67-inch FHD+ punch-hole display, 5G network support, 8GB RAM or 128GB ROM. It’s also a modular phone just like WP7, but we have to wait and see which modules will Oukitel actually release for it.

Oukitel WP10 5G rugged phone comes with a massive 8000 mAh battery. It also supports 18W fast charging, allowing the battery to be fully charged in under 3 hours. This rugged phone is designed with the working man in mind, it is built for tough and long hours of work. With 5G network it’s expected to consume more energy compared to 4G so the large battery capacity is a necessity. 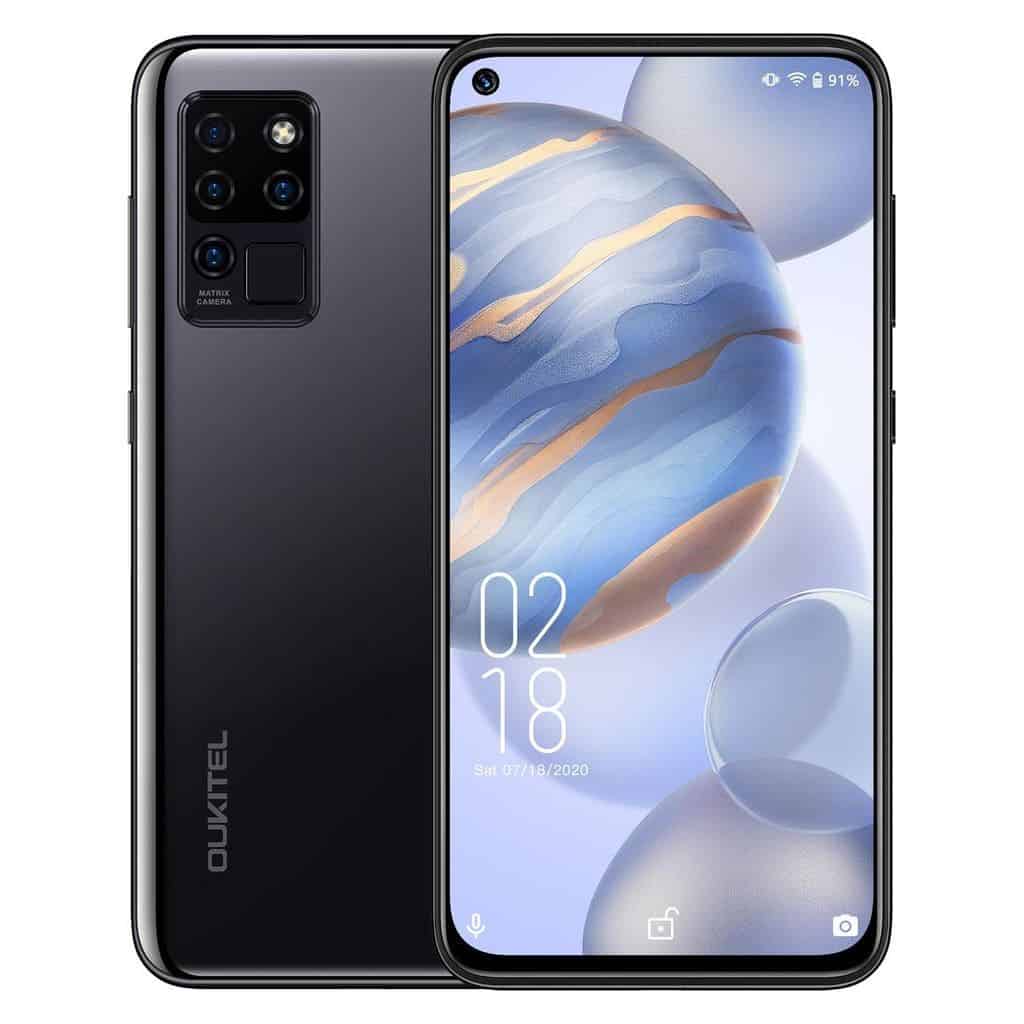 Oukitel C21 is a mainstream, budget-friendly smartphone launched by Oukitel in the summer of 2020. This affordable smartphone comes with a 16MP quad rear camera, 20MP AI selfie camera, 6.4-inch punch-hole display or MediaTek Helio P60 chipset with a 4 GB RAM and 64 GB of internal storage.

Although Oukitel C21 only comes with a 4000mAh battery capacity, it deserves a courtesy mention in this article considering it’s a midrange mainstream smartphone. Compared to smartphones from other brands in the same midrange bracket, C21 is still one of the most powerful in terms of battery capacity.

Previous MAXOAK power station Christmas sale with up to $250 off