We already have an idea of what the upcoming Vivo X60 lineup will bring. The latest successors of the Vivo X50 series have been in the news, and we also got to know about a new Exynos chipset that will be powering the new Vivo lineup. Today we have more specific release date information as well as an updated Geekbench listing that shows an impressive score for a mid-range chipset. 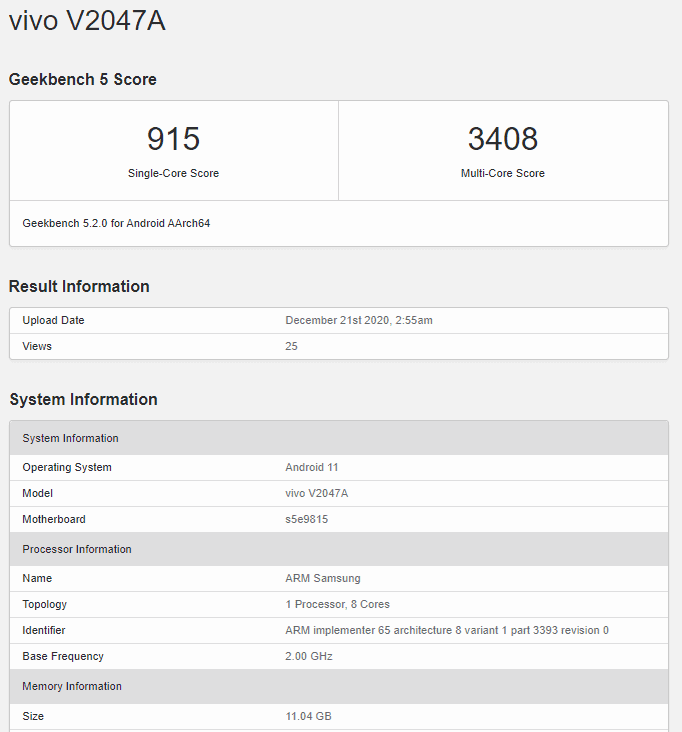 Previously, there was a GeekBench listing submitted on December 16th. According to it, the smartphone with model number Vivo V2047A, which we speculate is the vanilla Vivo X60 had 888 points in Single Core and 3244 in Multi-Core. While the newest GeekBench listing shows a much better score. In the latest Geekbench 5 testing, which was done on December 21st shows a single-core score of 915 and a multi-core of 3408.

If you are wondering about the increase in scores, well it is because of the higher base frequency. The first GeekBench reporting was done with a base frequency of 633mHz while the latest one is done at 2.00 GHz. Other than that, everything else is similar. The report shows a 12GB RAM variant and Android 11 operating system.

For comparison, the last year’s iPhone 11 Pro roughly scores 1326 in single core and 3318 in multi-core. Hence, the Exynos 1080 is having a good multi-core performance when compared to last year’s flagship A13 Bionic chipset. But it lacks behind when single-core performance is concerned. Although, it is still an impressive score for an Exynos mid-range chipset.

The vivo X60 series will be released at 19:30 on December 29, equipped with Exynos 1080 processor, which is its latest score. pic.twitter.com/l3cZTaqbdN

Apart from the latest GeekBench listing of Vivo X60, we also have news regarding the launch. IceUniverse posted a poster on Twitter along with GeekBench listings. According to the poster, the smartphone will be launching on December 29th. It was already revealed earlier. But now the time is revealed as well. The launch event of Vivo X70 will be held at 19:30 (4:30 PM GMT+5) on December 29th in China.

To recall, the Vivo X50 lineup is camera-centric. It will be similar this time around as well. We are expecting a triple rear camera setup led by a 48-megapixel shooter, 13-megapixel ultra-wide, and a 13-megapixel portrait sensor on the vanilla Vivo X60. While the Pro version will bring the 8-megapixel periscope lens as-well. Pairing the smartphones with a new powerful chipset will make the lineup even special. Let us know your opinions on the Exynos 1060-powered Vivo X60 lineup in the comments section below.

Read Also: SNAPDRAGON VS MEDIATEK: WHICH PROCESSOR SHOULD YOU OPT FOR?