Xiaomi is fully set to unveil its latest smartphone, Xiaomi Mi 11 series. This series will be the first device to use the Snapdragon 888 flagship SoC. According to Xiaomi, this series will be officially released on December 28th. Now, JD.com, the largest online store in China has commenced an appointment for this smartphone. However, the landing page does not have the official price of this device. According to JD.com, the price will be public on the launch day. 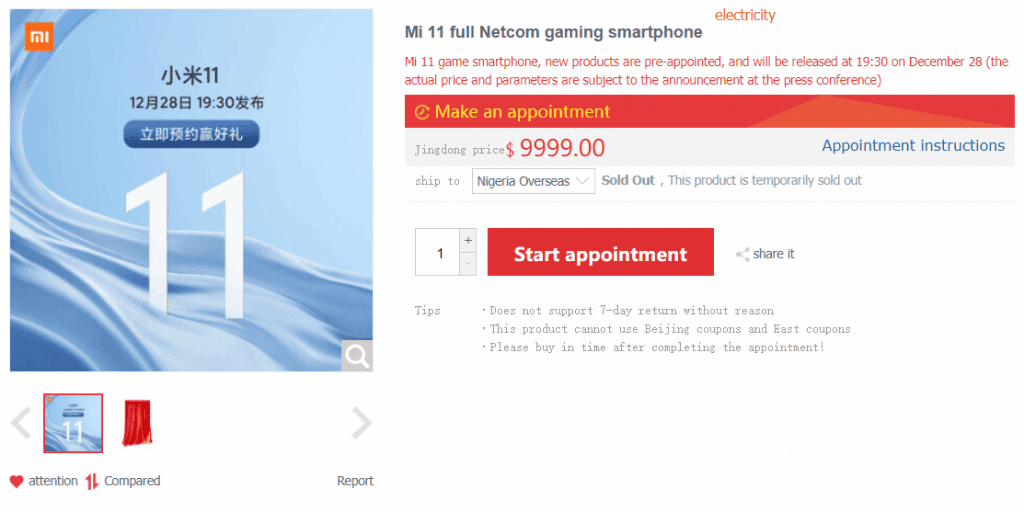 For Xiaomi, the Mi 11 series is the beginning of a new decade. It is now ten years since Xiaomi entered the smartphone market. It is amazing that the company has achieved so much in only ten years. There have been numerous leaks and speculations regarding the Xiaomi Mi 11 series. For starters, this series will have at least two versions – Xiaomi Mi 11 and Xiaomi Mi 11 Pro. Both smartphones will continue to use a punch-hole design. However, while the Mi 11 uses a hyperboloid screen, the Mi 11 Pro comes with a 2K quad-curved screen. The displays support up to 120Hz refresh rate as well as the native 10bit color depth.

In addition, Xiaomi Mi 11 Pro will support up to 100W super-fast charging. Recall that this is the specification of the Xiaomi Mi 10 Extreme Edition. Nevertheless, there are speculations that the Mi 11 Pro charging power may be up to 120W fast charging. The basic version of the series will receive a battery with a capacity of 4780mAh, and the larger variant with a 4970mAh battery. The standard version camera will have three lenses (108 MP + 13 MP + 5 MP), while the Mi 11 Pro will have a more interesting set of sensors: 50 MP + 48 MP + 20 MP + 12 MP.

Also, the Xiaomi Mi 11 appeared on Geekbench today. As expected, this smartphone comes with Qualcomm’s latest 5G flagship SoC, Snapdragon 888. It also has up to 12GB of RAM and runs Android 11. This device recorded a single core of 1135 points and a multi-core of 3790 points. This obviously meets Qualcomm’s official standard for the Snapdragon 888 SoC.

Previous Xiaomi Mi 11 has been spotted on Geekbench