Today, Galaxy Club reported that Samsung is developing a 5G smartphone called the Galaxy A82. The latter is expected to be unveiled in the second half of this year. 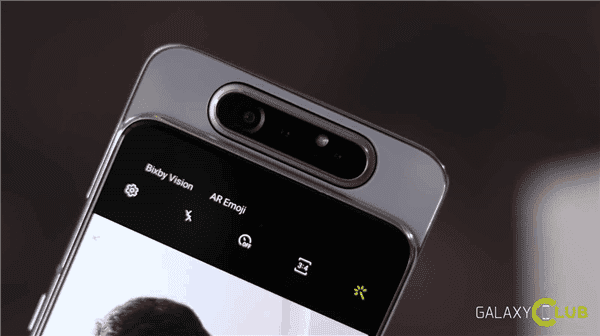 As a reminder, earlier in 2019, Samsung launched the Galaxy A80, a full-screen phone with a flip lens design. This phone uses a 6.7-inch true full-screen form with no bangs and no holes. The rear camera consists of a 48MP main lens, an 8MP ultra-wide-angle sensor, and a 3D depth-of-field lens.

When the user selects the selfie mode, the camera module will automatically flip from the back of the fuselage to the front.

In fact, we have reported about this a couple of days ago. But that time, we were focusing on that the Korean manufacturer will release a flipping lens smartphone. Now, it’s worth noting that this is going to be a 5G smartphone. We mean 5G has penetrated into every sphere. And this statement is true not only for smartphones but other niches as well. Anyways, as for the handsets, the upcoming Samsung Galaxy A82 is quite interesting model because it is going to be the first 5G smartphone using a flipping lens design.