Realme is gearing up to launch its 2021 flagship in the form of Realme GT 5G. The device has been leaking in several ways since the end of last year. Now, it is officially coming on March 4. Realme will use these last few days of February to build the hype for its upcoming flagship. Today, the brand posted some official images of the device on its Weibo profile. It confirms the phone will have a Blue colorway. Moreover, it confirms a special Yellow leather variant.

The official images also confirm a 64MP triple camera setup on the back and a 3.5mm headphone jack. The latter feature is quite unusual in recent flagships as more and more companies are removing the analog port. While some users don’t care for not having it, we know that lovers of wired headphones will certainly enjoy this feature. We can also see the USB-C port sitting alongside the speaker grille in the bottom part. The front isn’t pictured here, but since the handset has a conventional power key, we’re expecting the fingerprint scanner to go below the display, presumably one of the OLED kind.

We expect a battery capacity between 4,500 and 5,000mAh in the Realme GT. Previous reports were suggesting Realme’s 125W UltraDart charging to make its debut with the new flagship. However, 3C certification confirmed that the phone is coming with 65W fast-charging. It still will charge the phone in less than one hour, so no complaints here. Hopefully, the charging brick will be present in the retail package. This will be a good way for Realme to punch its competitors in China. 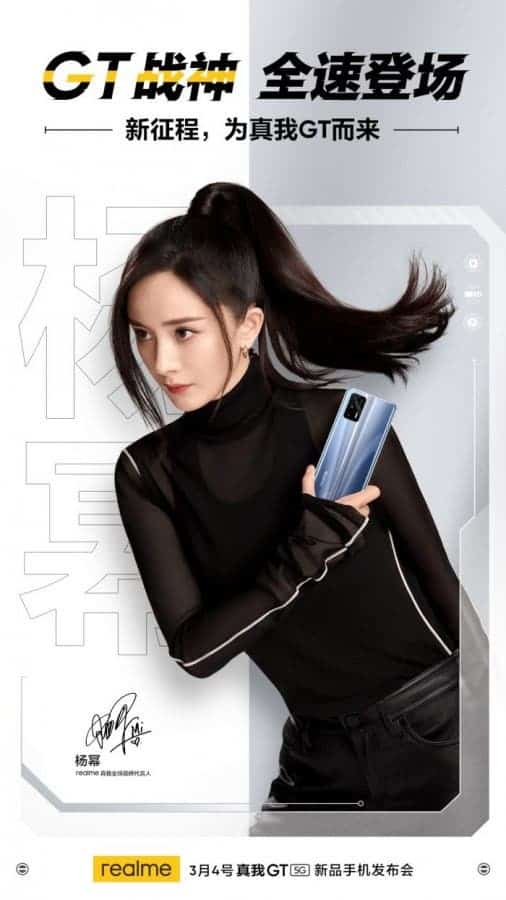 Besides the smartphone back, the company’s also revealed its new celebrity endorsement. The lady on the poster is Yang Mi. She is a prominent Chinese actress with hundreds of awards. She is placed in 6th place of Forbes China’s Top 100.

The Realme GT 5G, bears the codename Realme Race and RMX2022 model number. Under the hood, the phone will pack Qualcomm’s Snapdragon 888 SoC. The chipset will be paired with up to 12GB of LPDDR5 RAM and 256GB of UFS 3.1 storage. As mentioned above, the handset will go official on March 4 in China. Of course, we expect the device to reach global markets a few months later. The device will be a strong competitor for the Mi 11 and even the Galaxy S21 family. We also don’t expect it to cost as much as its rivals.

Previous Samsung Galaxy F62: Sales of the battery monster have started in India