iQOO is on a roll during these first months of 2021. The company started its year with the release of the iQOO 7 and, more recently, unveiled the iQOO Neo 3. Now, the company is already gearing up to unveil a new mid-range phone dubbed iQOO Z3. The company confirmed that the new handset will go official tomorrow and will be the first phone with a Snapdragon 768G chipset at the helm. The company confirmed this chipset is coming alongside 8GB of RAM. Vivo’s sub-brand also revealed the phone will pack a 120Hz refresh rate with a touch sampling of 180Hz. The company will make this a cost-effective gaming smartphone.

iQOO Z3 campaign also confirmed interesting features such as Eagle Eye mode 2.0, Multi-Turbo 5.0, 4D Game Vibrations, and a five-layer liquid-cooled heat dissipation system. The Snapdragon 768G is basically a Snapdragon 765G on steroids, so we believe that its gaming performance will be quite satisfactory. Besides the ensured performance, the phone is also coming to impress in other departments. Just like its sibling, this chipset also offers seamless 5G connectivity thanks to an integrated modem. Interestingly, iQOO will bring the virtual memory feature to ensure an extra 3GB of RAM based on the internal storage. So, in the end, the phone will feel like an 11GB of RAM phone. 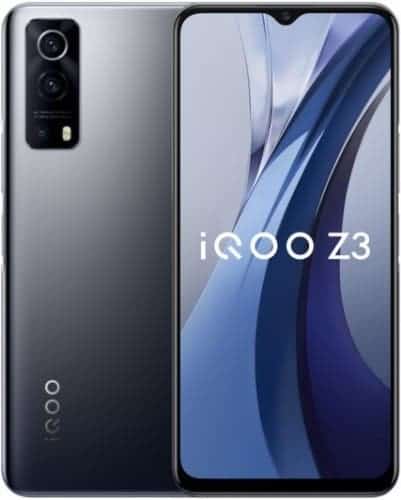 The renders of the iQOO Z3 listed on Chinese retailer JD.com reveal a triple-camera setup on the new gaming phone. Today, iQOO confirms this is a 64MP Triple-Camera setup. Apart from the main large sensor, we also have an ultra-wide and macro camera. The company also said that the iQOO Z3 can record 4K videos at 60 frames per second. Furthermore, the brand shared a few pictures show with the smartphone’s cameras. As we said before, iQOO is confident that this phone will impress in many aspects rather than just being considered a gaming phone.

Another interesting fact confirmed by the JD.com listing is that the phone is coming with 55W fast-charging. We’re not sure about the battery capacity of the iQOO Z3 right now. But we assume that it will be between 4,000mAh and 4,500mAh. The company will probably use dual-cell technology since standard cells can’t withstand modern fast-charging.

According to the leaked Geekbench listing, the phone will run Android 11 and we assume it is based on OriginOS in China. Moreover, the company will also sell a 6GB RAM variant. We expect all details to be revealed in the coming hours.

Previous Realme 8 Pro launched: Is it really a "leap"?

Next Realme 8 launched with Helio G95 chipset, S-AMOLED display and a new design