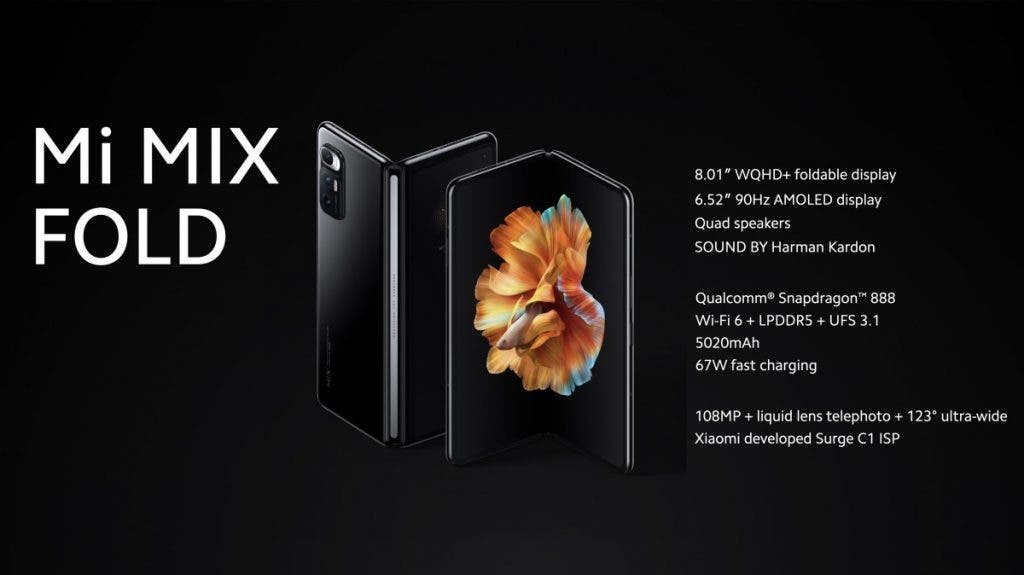 According to Xiaomi, in order to get a perfect display, it had to invest over $20 million in its research and development. In addition, the company had to put in no less than two years of work to get the perfect display. Indeed, the technology behind the Xiaomi Mi MIX Fold display is amazing. While the screen of this phone is probably the least impressive part of this phone, it is worth discussing considering that it is Xiaomi’s first attempt at a foldable display.

The Xiaomi Mi MIX Fold comes with an 8.01-inch OLED internal screen. This display supports a resolution of 1440p+ as well as an aspect ratio of 4:3.  The over 8-inch display is obviously tablet size and the largest in the market presently (according to Xiaomi). Due to the largeness of the display, Xiaomi was able to add the desktop mode with multiple resizable windows. Users can activate this desktop mode with a simple three-finger swipe.

The hinge is usually one of the main challenges in the development of foldable phones. However, Xiaomi overcomes this problem with a U-shape hinge that is 27% lighter than its contemporaries. According to Xiaomi, the MIX Fold effectively survived 1 million bends. With this data, this device will survive for much longer than any user will ever need it. This is nothing short of amazing.

After folding the device, users will have access to a regular smartphone display. The MIX Fold will have a 6.52-inch display after folding but with an unconventional 2,520 x 840 resolution. Interestingly, the display is also AMOLED and supports a wide aspect ratio of 27:9. 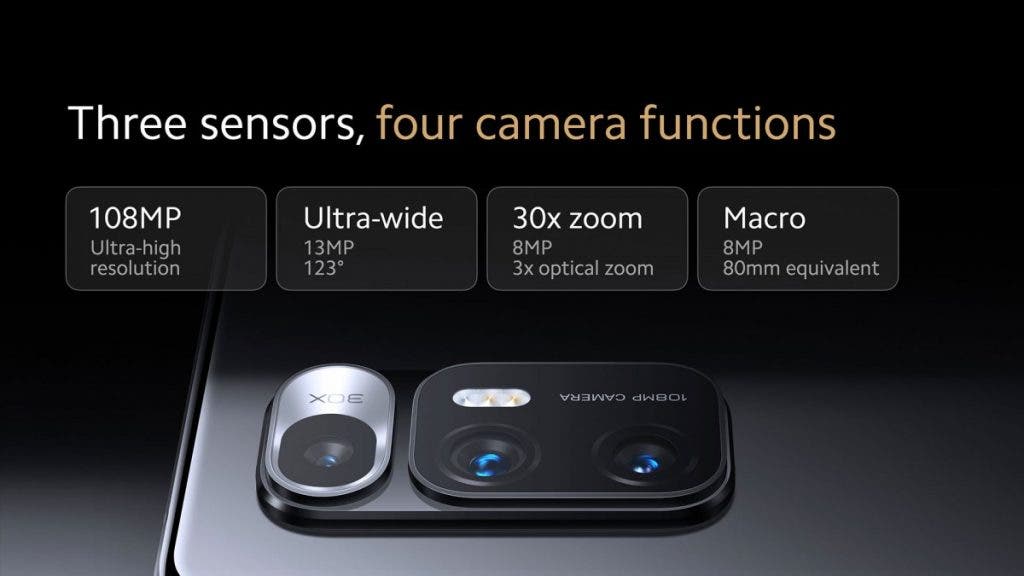 With this technology, the telephoto camera can adjust the optical magnification ratio from 3x to 30x. This means that you can capture images from a much longer distance than the regular telephoto lens. With a minimum focus distance of only 3cm, this lens favours long shots as well as macro shots. Nevertheless, in terms of pixel size, the telephoto lens is only 8MP. There is also no OIS thus users will have more work to do. Obviously, Xiaomi can not add it all on its first try. It needs to leave out some features for the next generation MIX Fold. We expect higher pixel size and OIS.

The company did a lot of work on the Liquid Lens for the telephoto camera. This technology uses a flexible film that is full of a transparent liquid. With the help of a precision motor, this liquid can change shape and form just like the lens in the human eye. This gives the lens the capacity to adjust from 3x to 30x. Though a liquid, Xiaomi claims it works perfectly even in extreme temperatures (-40ºC to 60ºC)

There is another Xiaomi “first” that comes with the MIX Fold. The company’s first Surge C1 image processing chip is an in-house chip that runs the 3A algorithms – Auto Focus, Auto Exposure, and Auto White Balance. It runs these algorithms in a power-efficient manner. So far as the semiconductor department is concerned, this is a major breakthrough for Xiaomi. 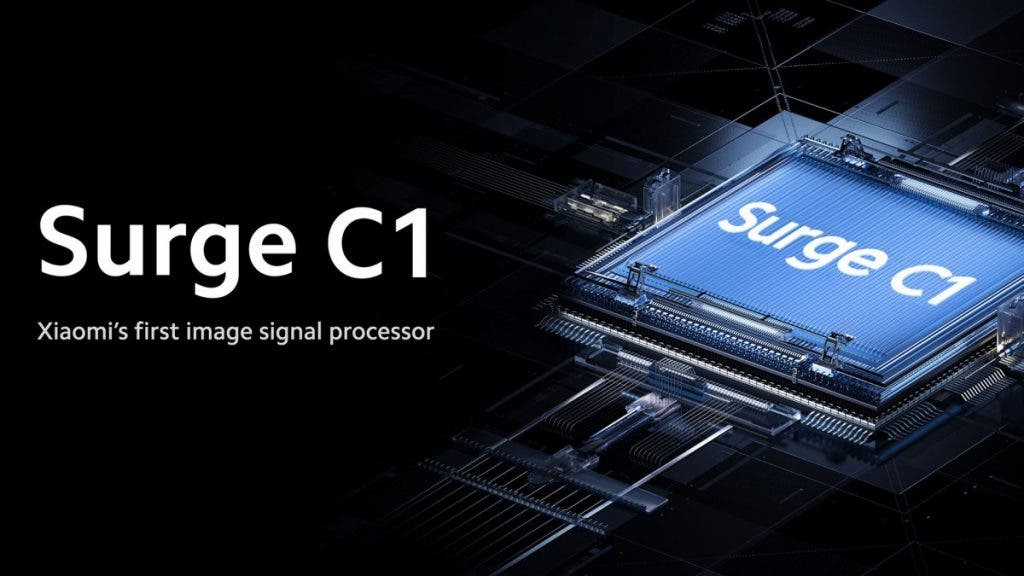 Hopefully, Xiaomi will follow up on the Surge C1 ISP Chip. About four years ago, the company unveiled the Surge S1 chip but after a couple of smartphones, it abandoned its own creation. Well, the Surge C1 is different from the Surge S1, it is not a smartphone chip, it’s an ISP chip. This simply means that it is a smartphone imaging chip, it makes the camera perform better.

This camera processor uses Xiaomi’s self-developed ISP + self-developed algorithms to improve processing. To achieve high and low-frequency signals, the Surge C1 chip uses dual filters. This ensures that the smartphone improves the signal processing efficiency by 100%. Regarding this technology, here is what Lei Jun, Xiaomi’s CEO had to say

‘We want to climb the high peak of innovative technologies … and we will not stop our exploration (of chips),’

Is the price of the Xiaomi Mi MIX Fold really a shocker? Well, it is. With all the hype around the MIX Fold including the Liquid Lens and Surge C1 chip, the pricing was already tending towards the Xiaomi Mi MIX Alpha $1999 price tag. However, Xiaomi surprised us with a $1520 starting price. 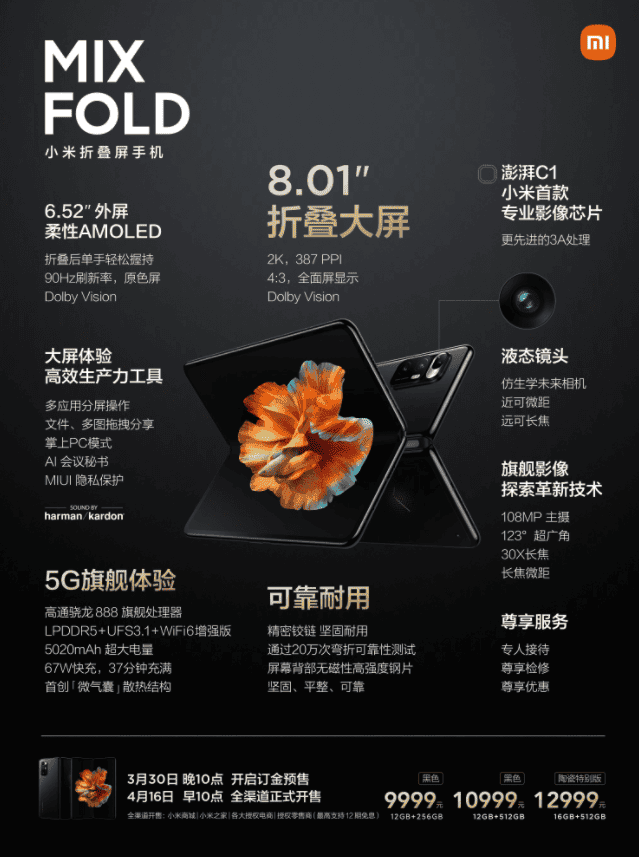 Looking at the price of other foldable smartphones in the market, the price of this device is a shocker. The Galaxy Fold starts at about $2000 while the Fold 2 sells for about $2,200. As for Huawei’s foldable phones, the Mate X starts at $2,500 while the Mate Xs start at about $3,200. Thus, the Xiaomi Mi MIX Fold starting at $1520 is about $500 cheaper. Let’s look at the full price details for the MIX Fold

The timing of the launch of the Xiaomi Mi MIX Fold is perfect. It arrives at a time where there are no other foldable smartphones from popular manufacturers hitting the shelves. Also, this smartphone brings a lot of innovations and the price tag makes it even more attractive.