Huawei is one of the top technology companies in China. Despite the multiple bans by the U.S. and other governments around the world, the company’s research and development is still top-notch. Presently, Huawei is developing a plethora of devices that are hitting the web gradually. The latest to leak is the Huawei Watch 3. According to a report from a popular Weibo leakster, the Huawei Watch 3 will come with a new User Interface (UI). 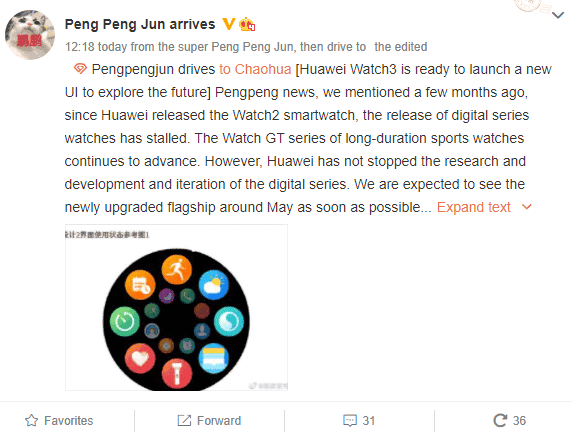 Furthermore, the leak claims that there will be a new general upgrade on this flagship smartwatch. As for the launch date, there is no official date for now. Nevertheless, the Weibo leak claims that this watch will arrive sometime in May this year.

In addition to the other information, the Huawei Watch 3 series will support the eSIM function. Furthermore, it will adopt a special design language on the new UI Harmony OS. This will make this flagship smartwatch completely different from the existing Watch GT series.

The leak also claims that the new Huawei Watch 3 will support multi-terminal transfer tasks. This device will also come with support for more third-party apps. Of course, this is one thing that many Huawei Watch users will; be looking forward to. There is now more probability that this Watch will support your favorite app.

In terms of functions, the new watch has a multiple sport modes different from the existing GT series. Also, the Huawei Watch 3 series will place more emphasis on high-end and intelligence. This smartwatch will be “smart” in all ramifications.

One aspect that will not be the best will be the battery life/performance. According to reports, Huawei Watch 3 may be lower than GT’s in terms of battery life. Nevertheless, the performance of the battery will still be acceptable.

Huawei’s smartwatch series has a long history that dates back to 2015. The very first smartwatch from Huawei is the Huawei Watch which was released at the 2015 Mate8 conference. After the launch of this device, we saw the new Huawei Watch 2 (and 2018 models) in 2017. Subsequently, we had the launch of the Huawei Watch GT series. The GT series has a number of models and it’s one of the longest series. We have had information on other smartwatches from Huawei including children’s watches and Fit watches. However, this is one of the earliest information on the new Huawei Watch 3.