Today, the first folding screen smartphone of Xiaomi went on sale through all channels. As expected, the first-day sales of the Xiaomi MIX Fold with a starting price of 9,999 yuan ($1533) exceeded 400 million yuan ($61.34 million) in just one minute. 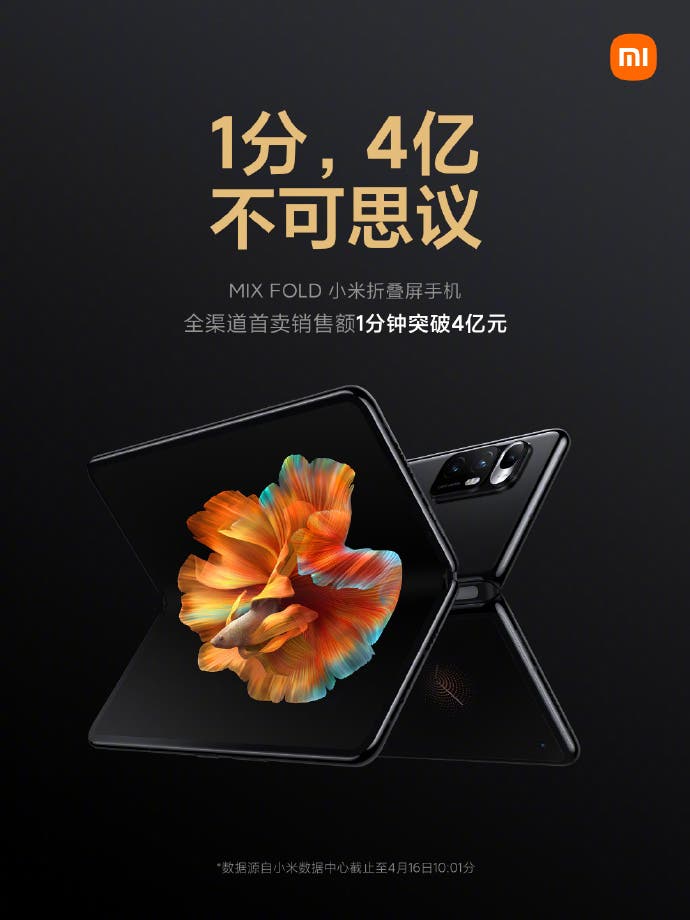 This achievement is really outstanding among folding screen smartphones. But what’s more important, it also proves that Xiaomi’s supply is sufficient this time. Its rivals sold only thousands on the first sales days.

Although it is Xiaomi’s first smartphone with a folding screen, the MIX Fold has the top quality. The manufacturer proves that it has passed 200,000 bending reliability tests, and the limit is up to 1 million times.

At present, Xiaomi has started an interesting challenge. There is a live broadcast room for the Xiaomi MIX Fold, which is tested for opening/closing uninterruptedly. Thus, it is folded every 1.6 seconds, challenging the 10-year service life.

At the same time, the Xiaomi MIX FOLD also has the top hardware parameters in the industry. It comes with the Snapdragon 888 + LPDDR5 + UFS 3.1 iron triangle solution. Also, it sports a 2K resolution folding screen. The phone also supports HDR10+, Dolby Vision, etc.

It is worth mentioning that the MIX FOLD comes with Xiaomi’s self-developed Surge C1 ISP chip. It has a dual-filter configuration, which can realize parallel processing of high and low frequency signals. The signal processing efficiency is increased by 100%. With self-developed algorithms, it can effectively improve the imaging effect.

In addition, the MIX FOLD also brought the world’s first liquid lens technology. It uses a bionic technology. The flowable liquid is wrapped in a film to replace traditional optical lenses, bringing changes in focal length and focus similar to the human eye. A single lens can achieve both telephoto and macro functions at the same time.