Huawei’s flagship folding screen Mate X2 series has been on the market for some time. Recently, a 4G version of the phone appeared on the net and is expected to be released in the near future.

Looking at the content of the network access information, the 4G version of the Mate X2 and the 5G version are the same except for the difference in network standards. In fact, even the processor is the same – the Kirin 9000. But the one on the 4G variant doesn’t support 5G, obviously. 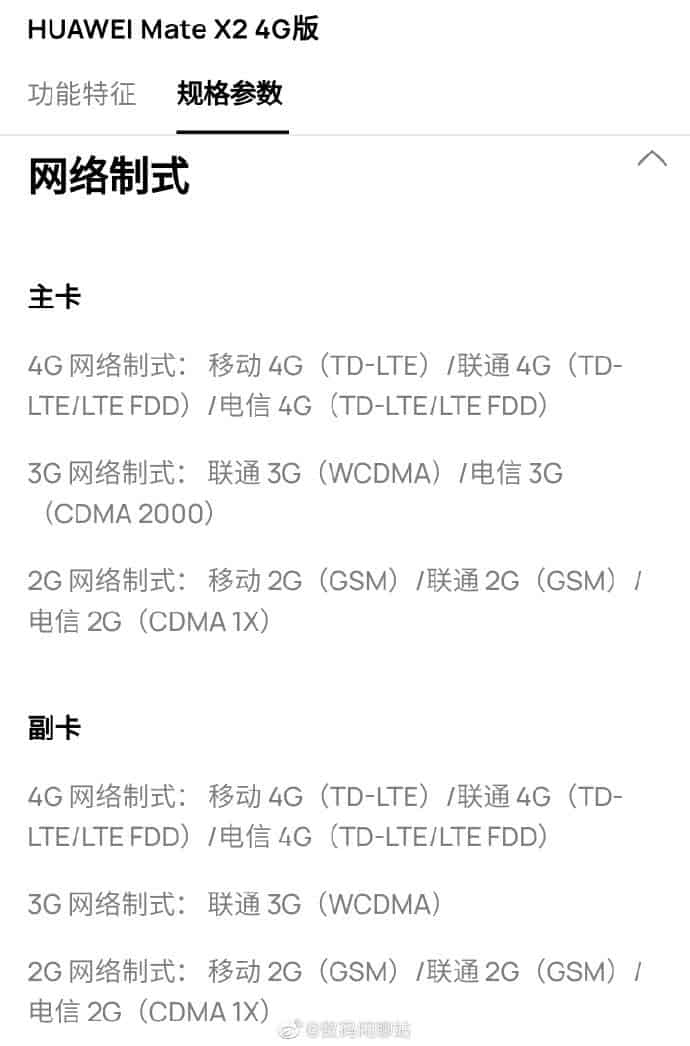 As a reminder, the Mate X2 was released in February of this year. It uses an 8-inch foldable flexible inner screen without holes. The display has a 2480×2200 resolution and a pixel density of 413ppi. Also, the screen supports a refresh rate of up to 90Hz and a touch sampling rate of 180Hz.

Well, as said, the key features of the Mate X2 4G will remain unchanged when compared with the original model. So if believing in a Weibo blogger, the phone has a Leica-labeled quad-camera and a 4500mAh large battery supporting Huawei’s 55W super-fast charging.

Regarding the appearance, the Mate X2 4G version has no changes as well. Thus, it still uses the first double-wedge-shaped integrated design and the industry’s unique double-rotating drop hinge.

At present, many new Huawei phones released 4G versions. We guess everyone knows the reasons for this. Although 5G is a mainstream, 4G versions with the appearance of 5G phones can reduce the price.

Interestingly, many users may think the most important part of a folding screen smartphone should be its display. Moreover, it should be the most expensive component. But a recent research shows that as for the Huawei Mate X2, replacing the motherboard will cost $1250 or $1115. This is noticeably more than $880 replacement of the display. This also means that the 4G version of the Mate X2 will still cost much. But there is no information concerning its launch date and price.

Next OnePlus preparing its Q series TVs for its Plug n Play webcam!