Sharp is a Japanese smartphone manufacturer. It is not very popular in the global market. However, Sharp devices are known for providing Qualcomm 800-series chipset and splendid display. Now, Sharp is all set to launch its next flagship-level smartphone named Sharp Aquos R6. It will be a successor to the previously launched Aquos R5G. Before the launch event, we already have the device renders showing a new design.

The renders of the device come from a camera leaker @nokishita_c. According to him, the Aquos R6 might be collaborating with Leica. “Co-engineered with Leica” is mostly seen on Huawei devices, however, we all know that business for Huawei has been challenging after the US Ban. Will Leica join hands with Sharp and leave Huawei? Well, time will tell. Nevertheless, if Sharp collaborates with Leica to improve their camera, it will be good news for Sharp.

Talking about the renders, the Aquos R6 looks unusual. It has a bold design, with a huge camera module in the center. It seems like there are  two camera sensors and an LED flash. One of the sensors is huge. On the front, there is a curved display. The phone will be using a punch-hole notch for the selfie camera. Overall, the device looks thick. The leaker also says that Aquos R6 will be launching on May 10th. Let’s check out the last year’s Aquos R5G smartphone.

The Aquos R5G was released in February last year. It also has an unusual design. There is a long vertical camera module, and I was not a big fan of the design. Last year’s device also had the tear drop notch, which was not up to date even in 2020. Plus, the phone featured a capacitive fingerprint scanner making it look old school. Hopefully, we will not see this mess on the new R6 model. 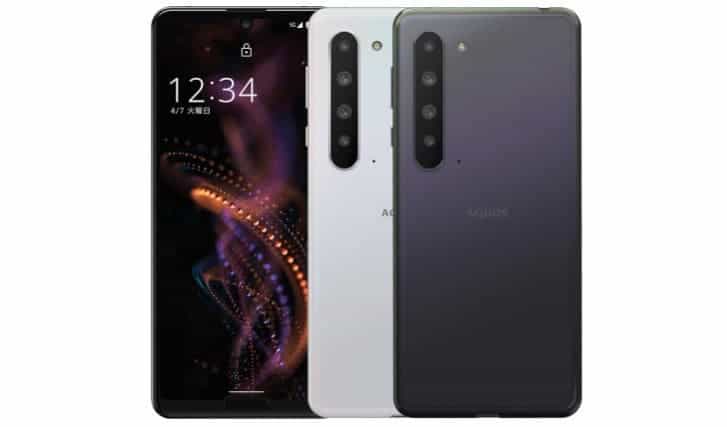 Talking about the specifications, the Aquos R5G features a 6.5-inch QHD+ IPS display with a higher refresh rate of 120Hz. The smartphone comes with a quad camera setup comprising 12MP primary shooter with OIS, 12 MP telephoto lens with OIS, a 48MP ultrawide snapper with 8K recording support and a ToF sensor. On the front, there is a 16MP selfie cam. Powering up the device is Snapdragon 865 with 3,730mAh battery. I hope this time the company uses an OLED display and a bigger battery.

Previous Apple's new MacBooks will get new colors like the iMac

Next Samsung Galaxy A52 5G launch in India is imminent