Although at first glance, the days of Redmi Note 8 are long gone, numerous insiders are reporting a possible revival of the once successful model in 2021. Mentions about it were available in the database of IMEI numbers and in the lists of the American regulator.

Xiaomi is preparing an updated version of the Redmi Note 8

According to one of the insiders, information about the new smartphone with model number M1908C3GG was discovered by an insider, Xiaomi product tester and software developer Kacper Skrzypek. 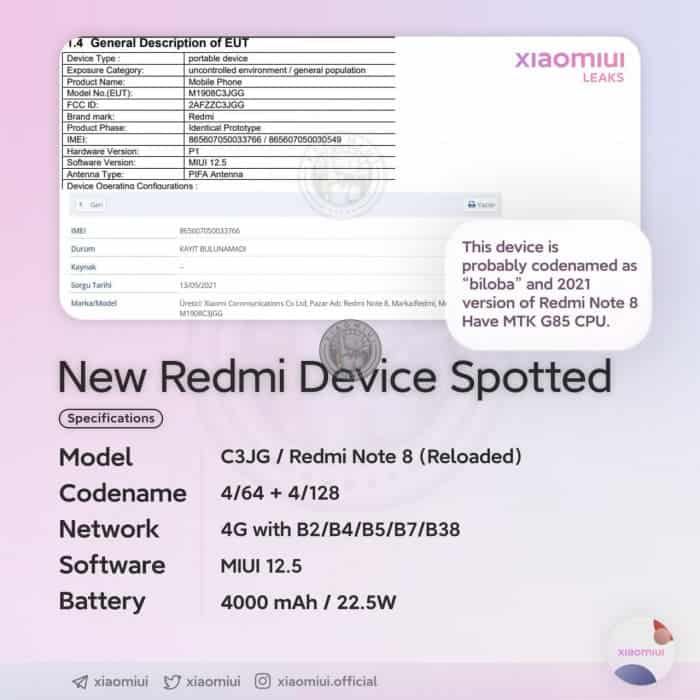 He has already published a Twitter post with screenshots of information from one of the Xiaomi sites. At the request of users to share a link to the original material, the insider said that he was afraid of the removal of the relevant information by company representatives.

Information about Redmi Note 8 (2021) appeared in the database of the US Federal Communications Commission. Moreover, according to another Xiaomi insider who has published detailed information about the new product, it will soon be released in some regional markets like Europe. 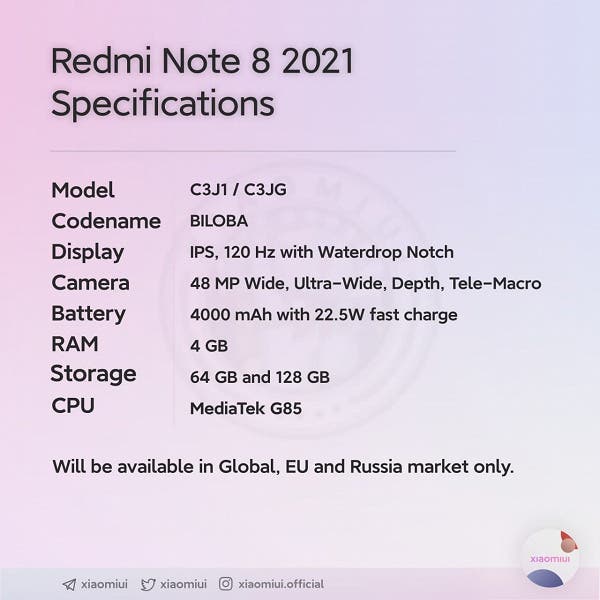 In addition, we claim that the model (codenames – M1908C3GG and M1908C3J1, Biloba) will be built on the MediaTek G85 platform, will receive 4 GB of RAM and 64/128 GB of flash memory. The IPS LCD display will offer a refresh rate of 120Hz. The smartphone will have a quad-camera with wide-angle, ultra-wide-angle modules, as well as a macro camera and a telephoto module. The resolution of the main sensor is 48 megapixels.

The device will receive a 4000 mAh battery with 22.5 W fast charging; and an unknown version of Android based on MIUI 12.5 user interface.

Internet sources report that the device will most likely be based on Qualcomm’s Snapdragon 750G processor. This solution combines eight Kryo 570 computing cores; with a clock speed of up to 2.2 GHz, an Adreno 619 graphics accelerator and a 5G modem.

Also, we assume that the 4G version of the Redmi Note 10 Pro will inherit a rechargeable battery with a capacity of 5020 mAh; with support for fast 33-watt charging via the USB Type-C port.

In addition, The amount of RAM will be at least 6 GB, the capacity of the flash drive is 128 GB. The official presentation may take place in the current quarter.

According to estimates by the International Data Corporation (IDC); 345.5 million smartphones were sold in the world in the first quarter of this year. This is 25.5% more compared to last year’s result. Xiaomi is in third place in the ranking of the leading suppliers with a share of 14.1%.

Previous Huawei MateBook 16, FreeBuds 4 and other devices to arrive on May 19